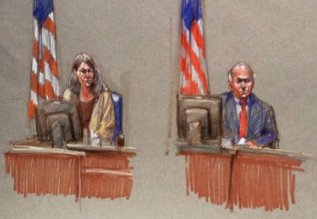 A military jury has begun deliberating whether convicted Fort Hood shooter Maj. Nidal Hasan gets capital punishment for the 2009 massacre on base that left 13 people dead and 32 others wounded.

The 13-member panel heard 45 minutes of emotional closing arguments from the government. The defendant, as he has throughout much of the proceedings, offered no justification or explanation, saying only, "I have no closing statement."

The jury of senior officers must weigh whether "aggravating" factors presented this week by the government outweigh any "mitigating" evidence the defendant has deliberately chosen to suppress.

The prosecution lawyer presented personal vignettes of all 13 victims killed and urged the panel to ignore Hasan's earlier statement that he was willing to die in custody as a "martyr" for his faith.

"He will never be a martyr, because he has nothing to give," Col. Michael Mulligan said in an even voice. "He is a criminal, a cold-blooded murderer. He is not giving his life; we are taking his life."

Inside the courtroom, widows and mothers wiped tears from their eyes throughout. Hasan remained emotionless, looking mainly at photos of victims on his monitor screen during closing, occasionally glancing at Mulligan addressing the panel.

He stroked his beard and wiped his nose repeatedly with a tissue.

Outside of brief comments at the beginning of the court-martial four weeks ago, where he admitted being the lone gunman that left 13 people dead and 31 others wounded, the defendant has not put on much of a case.

That left the government alone Wednesday to summarize the incident and the impact on the survivors, families of victims, and Fort Hood community.

"Death. He was trained as doctor to save lives, but on 5 November 2009, he only dealt in death," Mulligan said. The prosecutor tied the narrative together with a unifying theme: the separate teams of two officers in Class-A uniforms who knocked on the doors of the victim's families across the country to deliver the sad news.

Mulligan also recounted graphic details of the carnage inside Station 13, Room 42003 of the medical readiness center, where the victims were preparing for their military deployments overseas.

Lt. Col. Juanita Warman, 55, was shot four times and, from her nursing training, knew she was dying from internal bleeding. "She had just a few minutes to pass on one final message: 'Tell my family I love them.' "

For the widow of Spc. Jason Hunt, the subsequent emotional pain has been tough. "Grief is a personal emotion," Mulligan said. "Hers led her to the depths of suicide and back." Jennifer Hunt told the panel Monday she is raising her three children alone.

Hasan had indicated he wanted his service record, his lack of a previous criminal record and his psychological evaluations kept under wraps. Speaking in a clear voice from his wheelchair, Hasan dismissed the ex parte actions by his "overzealous defense counsel."

After weeks of mostly silence in his defense, Hasan had little more to say this week in the capital sentencing phase of his court-martial, telling the jury panel Tuesday three short words: "The defense rests."

His brief remarks produced a gasp in the courtroom.

The panel of senior officers last week convicted the defendant on all counts of premeditated murder from the incident at the deployment processing center on this sprawling U.S. Army base. Hasan was wounded in the attacks and remains a paraplegic.

The bearded defendant called no witnesses and presented no documentary evidence on why he should not die for his crimes. He also offered no explanation for his refusal to mount any defense in either the trial or sentencing phases. Judge Tara Osborn, an Army colonel, reluctantly granted his wishes, again telling Hasan, "You're the captain of your own ship."

The prosecution noted the heroism of three victims, whose despite their wounds, tried to charge the gunman. Civilian employee Michael Cahill was shot six times but managed to fling a chair at Hasan before succumbing. Capt. John Gaffaney, 54, and Spc. Frederick Greene, 29, were also cited.

Greene was shot a dozen times, more than any victim. "What infuriated his murderer so much that he nearly emptied half his clip" on one soldier, Mulligan said. "He died in dynamic engagement."

Greene leaves behind a wife and two daughters.