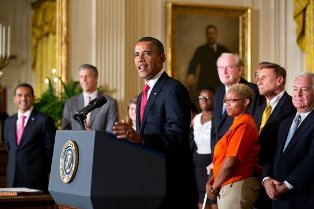 (CNN) -- President Obama will be hitting the road Thursday and Friday for a campaign-style bus tour of New York and Pennsylvania.

The president said he intends to focus on proposals aimed at curbing rising cost of higher education.

"My plan includes real reforms that would bring lasting change. They won't all be popular with everyone -- including some who've made higher education their business --but it's past time that more of our colleges work better for the students they exist to serve," the president said in an email to supporters this week.

Obama has spent much of the summer on similar trips, going in early August to Arizona and California, where he spoke on economic issues including the recovering housing market.

The two-day trip this week will take a similar tone.

The president will speak at the University of Buffalo Thursday morning and Henninger High School in Syracuse, New York, in the evening; ideal backdrops for young voters concerned with the cost of college tuition. On Friday, he will speak with Vice President Joe Biden in Scranton, Pennsylvania.

In the e-mail, Obama maintained that affordable college tuition is critical to middle class families, saying "we have to fundamentally rethink about how higher education is paid for in this country. We've got to shake up the current system."

Student loans -- another critical element in the cost of higher education -- were a topic of fierce debate before Congress took its August recess.

In the end, legislation was passed to keep interest rates on loans down, but only after intense negotiations and gridlock that forced the law to be enacted retroactively, since lawmakers were unable to come to a consensus before rates rose.

The White House has been heavily publicizing the bus tour, touting it as on topic in the larger theme of "A Better Bargain for the Middle Class."

In a statement provided to CNN on Thursday morning, the White House outlined more details of the proposed changes, which include tying "financial aid to college value" based on a new ranking system to be carried out by the Department of Education.

The proposal also advocates for a "pay as you earn" system for the repayment of debt, by which borrowers would be able to "cap their federal student loan payments at 10 percent of their monthly income." Currently, this option is only available to those students who began taking on student loans after 2008, or who have not borrowed since 2011.

Additionally, the president's plan recommends tying academic progress to the distribution of student aid, specifically suggesting that students "complete a certain percentage of their classes before receiving continued funding", which the White House says would encourage more students to graduate on time, thus incurring less debt.