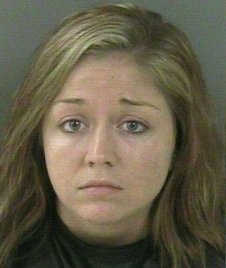 Enough with the texting, a Florida judge told Kaitlyn Hunt after hearing testimony about thousands of text messages -- some of them explicit -- the Florida teenager reportedly sent to her underage girlfriend after being ordered not to while awaiting trial on charges of having sex with the girl.

Hunt was 18 when she was charged with two felony counts of lewd and lascivious battery after allegedly having sexual relations with the girl, who was 14.

Pegg made his ruling after an Indian River Sheriff's Office detective testified about the contents of an iPod that Hunt had given the younger girl -- including more than 20,000 text messages, "explicit" videos and nude pictures -- despite a court order that the two not communicate, electronically or otherwise.

"It's overwhelming that Ms. Hunt has chosen to violate the conditions of her bond deliberately and willfully on several occasions," Pegg said in explaining his decision.

In addition to the extensive exchange of messages since March 2013 -- which began days after the no-contact order was issued -- Detective Jeremy Shepherd further testified that he'd learned the two had secretively met as recently as a few weeks ago.

Under cross-examination, Shepherd noted that in some cases, the younger girl initiated contact, though he emphasized that Hunt had given her the iPod on which they illicitly communicated. And the detective added, the younger teenager "has not told me the full truth in a couple of my interviews."

After Shepherd left the stand, Hunt's lawyer, Julia Graves, did not dispute that there "has been some contact with the victim" and her client.

"We're not going to contest all the evidence," Graves said Tuesday in court. "But what we would ask for is that the defendant (be able to be) bonded out, to be placed on house arrest without any electronic communication of any kind ... We think that would keep the judicial process safe."

The judge, though, thought differently.

"She simply can't be trusted to abide by the court order," Pegg said of Hunt.

The court hearing Tuesday was graphic and, for Hunt, emotional. She held a tissue in her handcuffed hands that she repeatedly used to wipe tears from her eyes. The proceeding marked the latest turn in a story that first captured the nation's attention months ago.

Hunt's family says the relationship was consensual, with their lawyer claiming authorities wouldn't have gone after her if it had involved a male and a female instead of two teenage girls. In Florida, a person under the age of 16 is not legally able to consent to sex.

Hunt's parents went public with their story after their daughter was charged. They essentially accused the alleged victim's family of going after their daughter because she is gay, while Hunt spoke out about her fears of paying for a relationship that she didn't think was wrong.

"I'm scared of losing my life, the rest of my life," she said earlier this year, "not being able to go to college or be around kids, be around my sisters and my family."

The younger girl's family, though, said that wasn't true and insisted that they were only trying to protect their own daughter.

"We had no other alternative but to turn to the law, use it basically as a last resort," the victim's father, Jim Smith, had previously told CNN affiliate WPEC.

This debate has been playing out publicly since Hunt was charged, during which time prosecutors offered her at least two plea deals. The most recent one -- offered in July, according to Bruce Colton, the state attorney for Florida's 19th judicial circuit -- would have led to Hunt being subject to a curfew and having to do community service, but avoiding jail time and not having to register as a sex offender.

Then, on August 6, the victim's father alerted authorities to the iPod and its contents, Shepherd said.

He interviewed the underage girl the next day, when she told him she'd given Hunt her locker combination and found the iPod in her locker on the last day Hunt was in their school.

This type of iPod allows people to exchange text messages and other media.

On some of those texts, Hunt indicated that she understood that such communications violated the court order.

"No matter what, if they find out that we talked, I'm going to jail until the trial starts," she wrote, according to Shepherd.

Pictures on the iPod showed the young couple together and a nude Hunt. There was also video of a naked Hunt touching herself in a sexual manner, the detective testified.

Authorities determined these images originated at Hunt's home in the weeks and months after the no-contact order had been issued, said Shepherd.

Hunt, who turned 19 last week, was booked into detention Monday night after her bail bond company declined to secure her $5,000 bond any longer and picked her up.

Her family has not commented on the latest developments in the case.

The original charges against Hunt carry a maximum of 15 years in prison upon conviction.

Based on the newly revealed evidence, prosecutors filed a new charge against Hunt for "transmission of material harmful to minor by electronic equipment."