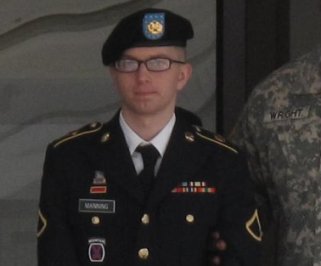 For leaking hundreds of thousands of classified documents, Bradley Manning is set to spend the next three decades in prison.

A military judge on Wednesday sentenced Manning to 35 years in prison -- less than the 60 years prosecutors sought, as well as the 90 years he could have received.

The former Army intelligence analyst -- convicted in July of stealing 750,000 pages of classified documents and videos and disseminating them to WikiLeaks -- will be credited for the roughly three and a half years he's already served in detention.

The judge, Army Col. Denise Lind, also reduced his rank from private first class to private, and ordered him to be dishonorably discharged. Manning also will forfeit pay and benefits.

Manning showed little to no reaction when Lind sentenced him at the military court in Fort Meade.

The sentencing wraps up a case of what prosecutors called the biggest leak of classified materials in Army history.

Prosecutors have said Manning acted as a "determined insider" in leaking classified information about the wars in Iraq and Afghanistan and should have been locked up for at least 60 years.

Manning's lawyer contended he could be redeemed.

"There may not be a soldier in the history of the Army who displayed such an extreme disregard" for his mission, Capt. Joe Morrow, the prosecutor, said Monday during final sentencing arguments.

Manning's arrogance, Morrow said, meant that he "felt he alone was knowledgeable and intelligent enough to determine what information was to be classified."

Defense attorney David Coombs did not ask for a specific sentence but said that his client was an excellent candidate for rehabilitation and that he should not be left to "rot in jail."

"Perhaps his biggest crime was that he cared about the loss of life that he was seeing and couldn't ignore it," he said of Manning's decision to turn over the explosive information to WikiLeaks.

"This is a young man capable of being redeemed," Coombs said in final remarks. "The defense requests, after the court considers all the facts, a sentence that allows him to have a life."

Manning was found guilty of 20 of the 22 charges against him, including violations of the U.S. Espionage Act. Manning avoided a potential life sentence when Lind rejected charges that his actions aided the enemy.