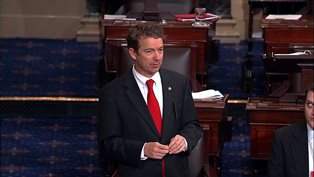 The Kentucky Republican's remarks came the same week a new measure was signed into law in North Carolina requiring voters present a valid government-issued photo ID in order to cast a ballot. Similar laws are being proposed in several other states after June's Supreme Court decision gutting the federal Voting Rights Act. That ruling effectively invalidated a key provision of the 1965 law that gives the federal government oversight of states and localities with a history of voter discrimination.

But Paul, speaking this week in Louisville, said those places previously covered by the federal law no longer showed any evidence of discriminating against minorities.

"The interesting thing about voting patterns now is in this last election African-Americans voted at a higher percentage than whites in almost every one of the states that were under the special provisions of the federal government," he said, according to WFPL radio. "So really, I don't think there is objective evidence that we're precluding African-Americans from voting any longer."

Opponents of voter ID laws include national civil rights organizations like the NAACP and ACLU, who say the laws place restrictions on voting that disproportionately affect minority voters, who are less likely to have a valid photo ID.

Supporters, however, say providing photo identification is a reasonable request to ensure voters are eligible.

"I don't see a problem with showing your driver's license to vote," Paul said this week. "I also think that some people are a little bit stuck in the past when they want to compare this. There was a time in the South when African-Americans were absolutely prohibited from voting by selective applications of bizarre and absurd literacy tests. And that was an abomination, that's why we needed the Voting Rights Act, but that's not showing your ID."

Paul, who is considering a run for the 2016 GOP presidential nomination, made his remarks on voting rights the same week a potential Democratic rival decried the new laws. Former Secretary of State Hillary Clinton, speaking at a meeting of the American Bar Association, said the Supreme Court's ruling on the Voting Rights Act had opened the doors for widespread disenfranchisement for minorities.

"Not every obstacle is related to race, but anyone who says that racial discrimination is no longer a problem in American elections must not be paying attention," Clinton said. "And despite the best efforts of many well-intentioned election officials, discrepancies and resources across precincts and polling stations still disproportionately affect African-American, Latino, and young voters."

A first-term senator, Paul was elected with strong support from the tea party. In recent months, he's spoken frequently of adopting a more welcoming stance in the Republican Party to African-American and Latino voters, who voted heavily for President Barack Obama in last year's election, according to exit polls.

He's dealt with race in the past, including this summer when it was discovered an aide and collaborator on his 2010 book had a past as a pro-Southern secessionist who used the name "Southern Avenger." The aide later resigned.

He faced questions during his 2010 Senate campaign about whether or not he would have voted for the 1964 Civil Rights Act.