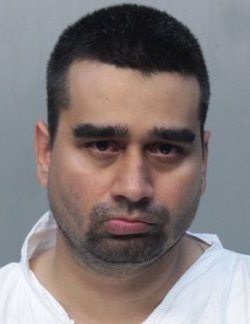 People confess to a lot of things on Facebook: their frustrations, bad habits, secret longings and new loves. A Florida man confessed to something much more sinister Thursday. He said he killed his wife.

Derek Medina, 31, posted a picture of her blood-stained body -- collapsed and contorted on the kitchen floor -- to his Facebook feed with a note.

"Im going to prison or death sentence for killing my wife love you guys miss you guys takecare Facebook people you will see me in the news."

Medina, who lives in South Miami, drove to see his family, to tell them what he did. Then he turned himself in to police, according to his arrest affidavit.

He was charged with first degree murder.

"That is my friend there."

Other Facebook users reacted with disgust to the posting of the picture of his wife's corpse. She was 26.

The disgust did not prevent the commenters from sharing Medina's photo. Again and again.

Her gruesome likeness stayed online and was passed along for at least five hours. Facebook was notified of the content and employees removed the picture and disabled Medina's page and that of his deceased wife, according to Facebook.

In his note, Medina accused his wife of abusing him and asked his friends for their understanding for what he did to her because of it.

The police report with his confession cast a more detailed light on the course of events.

He and his wife argued. He pulled a gun on her. She threatened to leave him. He put the gun away and followed her. She unloaded a volley of punches on him. He fetched the gun again. She pulled a knife. He wrestled it out of her hands. She punched him again.

Then he shot her "multiple times."

He felt certain she was dead. He did not call 911, the affidavit states. He changed clothes, and after seeing his family, went to a police station and began the process of confessing.

After he gave police his address, they drove to the scene, where they found the body.

The couple's 10-year-old daughter was also still in the house, police said. She was physically "unharmed."

Medina self-published self-help books and maintained a website called EmotionalWriter.com. His books claim to be about "effective communication" and "marriage counseling tips," according to the website.

"Derek Medina is an emotional writer. His goal is to save people's lives thru his books he has published," the website says. "My goal is for you, the readers, to open up your eyes and change for the better."

Hours before the slaying, Medina posted a picture of his wife, his daughter and himself having dinner together outdoors at a marina.

They were all smiling.

CNN's Katie Caperton and Ryan Marylynn contributed to this report.