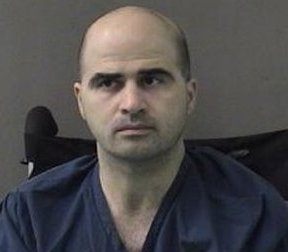 On Tuesday in court, Staff Sgt. Alonzo Lunsford stared hard at the Army psychiatrist in a wheelchair who hours earlier admitted to carrying out the 2009 massacre at Fort Hood, appearing to brace for questions from the man now acting as his own attorney.

The drama of Hasan facing and possibly questioning those who survived his attack was expected to continue Wednesday, a day after Hasan left no room for question about who was behind the shooting rampage and why.

Hasan's blunt declaration came during his brief opening statement before a panel of 13 senior officers who will decide his fate. He is charged with killing 13 people and wounding 32 on November 5, 2009, at a processing center for soldiers heading to Afghanistan and Iraq. He faces a possible death sentence, if convicted.

Hasan is representing himself, and is expected to cross-examine witnesses as well as possibly testify on his own behalf.

The courtroom turned silent as Lunsford, who was shot seven times during the rampage, was called to testify. He was the first of several survivors scheduled to testify against Hasan.

Lunsford recounted how the gunman rose from a chair in the processing center, shouted "Allahu Akbar," pulled out a pistol and began shooting.

"It was a state of panic," Lunsford said.

Lunsford, a health care specialist, described how his friend and colleague, physician's assistant Michael Cahill, tried to hit Hasan with a chair to stop the shooting; Hasan shot him dead. Soldiers tried to flee or take cover inside the processing center as Hasan fired dozens of shots.

As Lunsford was checking behind him, "Major Hasan is turning the weapon on me," he said. "He has a laser on his weapon and it goes across my line of sight and I blink. In that time, he discharges his weapon. The first round, I'm hit in the head."

A second shot caught Lunsford in the back. He decided to play dead for a while before changing his mind and deciding to run for the door. He made it out of the building but was shot five more times outside, he testified.

Hasan continued shooting at Lunsford even as he was receiving first aid outside the processing center, before police arrived. Officers shot and wounded Hasan, ending the rampage and leaving him paralyzed from the chest down.

After the prosecution finished questioning Lunsford, the judge asked Hasan whether he had any questions for the witness.

"I have no questions," Hasan said.

Hasan also declined to question Michelle Harper, who worked at the deployment center and was inside when the shooting began. Prosecutors played a recording of her 911 call, where she pleaded for help.

A U.S.-born citizen of Palestinian descent, Hasan had been scheduled to deploy to Afghanistan before the killings. Prosecutors hope to show that the devout Muslim had undergone a "progressive radicalization," giving presentations in defense of suicide bombings and about soldiers conflicted between military service and their religion when such conflicts result in crime.

Hasan did not want to deploy to fight against other Muslims and believed "that he had a jihad duty to kill as many soldiers as possible," said Col. Michael Mulligan, the lead prosecutor in the case.

Investigators found 146 spent shell casings in the room where the attack began, Mulligan said. Hasan carried two laser-sighted pistols and 420 rounds of ammunition, his pockets lined with paper towels to muffle the sounds of the magazines banging together, he said.

Hasan told the panel in his opening statement, "We mujahedeen are trying to establish the perfect religion." But, he added, "I apologize for the mistakes I made in this endeavor."

The mujahedeen consider themselves as warriors who defend the Islamic faith.

Hasan told his family he had been taunted after the al Qaeda attacks of September 11, 2001. Investigations that followed the killings found he had been communicating via e-mail with Anwar al-Awlaki, the Yemeni-American radical cleric killed by a U.S. drone attack in 2011.

The case was first set to begin in March 2012, but has been delayed repeatedly, notably over a previous judge's unsuccessful demand that the beard Hasan has grown while in custody be forcibly shaved.

Among others scheduled to testify include Chief Warrant Officer Christopher Royal, who survived the shootings with two bullet wounds to his back. The slugs left him with nerve damage that numbs his left arm and leg and sends streaking pains "shooting up and down my back."

It's also left invisible scars as well, post-traumatic stress that has hurt his ability to perform his duties as a computer specialist and left him unable to feel safe in his own country.

Royal escaped the gunfire only to go back into the processing center in an attempt to tackle Hasan.

"I had escaped without being wounded," Royal said. "I got ... in the parking lot, and then I said, 'I can't let him get away with this.' And I wasn't even thinking that I didn't have a weapon. I just knew that I couldn't let him get away."

Lunsford said Tuesday he encountered Royal outside the building.

"I ask him, 'Am I out of the building yet?'" Lunsford testified. "He says I am, and to play dead.