Nothing Is Simple: Detroit's Race for Mayor 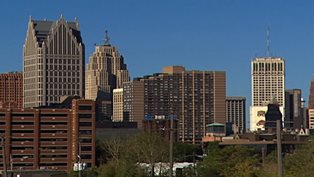 (CNN) -- Detroit gets just a little more dysfunctional Tuesday as 16 different individuals vie to become what has become just the second most powerful person in the now-bankrupt city. Further complicating matters, one of the front runners isn't even on the ballot.

After Tuesday's primary vote, two finalists will go on to face off in the Nov. 5 general election.

Of the 16 mayoral hopefuls, only 14 are actually on the ballot. One of those missing is also considered one of the frontrunners, Detroit Medical Center CEO Mike Duggan, who was disqualified from the ballot because he filed to run too early, before he'd lived in Detroit for the full year required.

Undaunted, Duggan has raised $1.2 million in his write-in bid, according to the Detroit Free Press.

A main thrust of Duggan's campaign has been to get people to know his name, rather than fall into a measure of apathy and simply choose among the contenders actually on the ballot. His campaign even has a jingle out meant to ensure precisely that. "We want every Detroit voter to know how to spell Mike's name as instinctively as their own," the campaign said in a blog post.

Of the mayoral contenders actually on the ballot, Duggan's closest competitor is believed to be former Detroit Police Chief and current Wayne County Sheriff Benny Napoleon. The Detroit Free Press reports that Napoleon has raised $600,000.

In addition to the mayor's race, 54 candidates are on the ballot for nine city council seats, seven for specific districts and two at-large seats.

Whoever wins the November mayoral race will inherit the largest municipal bankruptcy in U.S. history. They will succeed Mayor Dave Bing - who has chosen not to run for reelection - in working with state appointed emergency manager Kevyn Orr. He is the one really pulling the strings of power in Detroit.

Orr was appointed emergency manager by Michigan's Republican Governor Rick Snyder in March and oversaw the city's bankruptcy filing last month. The filing came after Snyder and city officials decided Detroit could not meet its $11.5 billion in liabilities, particularly associated with pension benefits and healthcare as well as unsecured debt owed to investors.

There has been little indication that the federal government will intervene in Detroit's bankruptcy, a move a majority of Americans oppose.