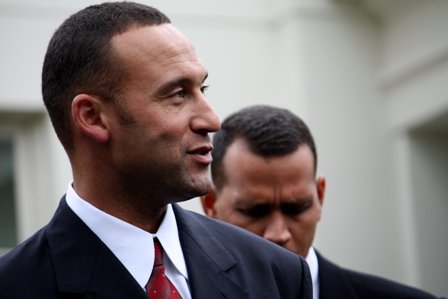 The length of the suspension was not known nor was the timing of any announcement. A number of news outlets reported Sunday night the suspension will be for at least 214 games, meaning it would end in the 2015 season.

Major League Baseball was negotiating with the 38-year-old slugger last week about a deal for a lengthy suspension rather than a lifetime ban over the Biogenesis scandal, according to several outlets.

A-Rod is accused of having ties to the now-shuttered Biogenesis anti-aging clinic in south Florida and taking performance-enhancing drugs. He has denied the accusation.

Last month, Braun was suspended without pay for the rest of this season for violating the league's drug policy, baseball Commissioner Bud Selig announced.

Rodriguez has missed the entire 2013 season so far after undergoing hip surgery, and he told reporters Saturday he plans to rejoin his teammates for Monday night's game in Chicago against the White Sox.

"If he's in there, I'm going to play him," Girardi told reporters Sunday night.

Rodriguez and the league may be in for a lengthy legal fight, said CNN's sports reporter Rachel Nichols.

Usually, suspensions related to drug offenses are made under the players' collective bargaining agreement, allowing suspended players to keep playing while their cases are being appealed.

"That's probably not going to be the case with A-Rod," Nichols said. "We're expecting him to be suspended under the commissioner's powers, which means that he would not be able to play while he's doing an appeal, which is why the court system might get involved."

Rodriguez is considered one of the game's greatest sluggers. He has 647 home runs -- the fifth most ever -- in 19 seasons.

In 2009, he had an outstandng postseason in helping the Yankees win their most recent World Series title.

He holds the largest contract ever in American sports, signing with the Yankees in 2007 for $275 million over 10 years.

Rodriguez said Friday he believes his contract makes him an attractive target for a baseball ban or suspension.

"There's more than one party that benefits from me not ever stepping back on the field -- and that's not my teammates and it's not the Yankees fans," he said.

Rodriguez has admitted using banned substances in the early 2000s but also has denied taking any after 2003. He has never been suspended by the league for a drug violation.

Rodriguez may not be the only player facing suspension Monday as a result of the Biogenesis scandal, with reports of more than a dozen others possibly being punished.

First-time offenders receive a 50-game suspension, so if they begin their punishments Monday, they could be back playing before the opening rounds of the playoffs.