Video: Men Charged with Imprisoning Teen in Box on Pot Farm to Be in Court Wednesday 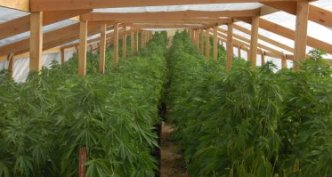 Two Northern California men are due in federal court Wednesday in what began as another big pot-growing drug bust but what has become a horrifying story of one teenager's alleged torment, captivity and sexual abuse.

The criminal complaint against the two men -- Ryan Balletto, 30, and Patrick Pearmain, 24 -- outlines the allegations of a 15-year-old girl's ordeal of being held in a coffin-like box for hours on end at a marijuana-growing "farm" where she worked trimming plants.

Balletto and Pearmain were criminally charged in federal court earlier this month -- and are in custody without bail -- with conspiracy to manufacture and distribute more than 1,000 marijuana plants and with using a minor in a drug operation. Additionally Pearmain faces state charges of kidnapping to commit robbery or rape and unlawful sex with a minor. Balletto faces state charges of lewd and lascivious acts with a child.

Efforts Tuesday to reach attorneys for the two men were not successful.

The girl sometimes was held in a metal toolbox 4 feet long, 2 feet wide and 2 feet high, authorities said. According to the criminal complaint, she told authorities that the men "put her in the box to 'teach' her because they had a 'point to prove.'"

The girl referred to the marijuana operation as a "mission" and said the men locked her in the box to protect the operation, according to the complaint.

"Specifically, they did not want (the girl) to 'ruin the mission' or 'go off and say something about the mission,'" the complaint stated.

The box was hoisted at an angle to allow a hose to be inserted "to wash her off and rinse human waste from the inside of the box without letting her out," the complaint said.

Federal authorities declined to comment Tuesday on the whereabouts or current condition of the girl.

But a psychologist who had read about the case told CNN that he was shocked by the details and that he believes the girl will suffer from post-traumatic stress disorder.

"She is so different from, say, a POW ... She was in a box. She's going to need a lot of therapeutic treatment," said California-based clinical psychologist Mark Burdick, who is not involved in the case.

"This is obviously a very traumatic situation for her...It is cruel, cruel and unusual punishment for a 15-year-old girl, and she will undoubtedly need a structured therapeutic environment for what could be years," Burdick said.

According to the criminal complaint, federal agents began a suspected narcotics investigation in late 2011, and Balletto was one of the individuals suspected. Last August, agents identified land that he had bought in Lake County, California, north of San Francisco.

During a surveillance flyover of that land in April, a Lake County detective spotted two greenhouses that appeared to be full of marijuana plants.

The minor was traced from a cell phone call to a hotel in Sacramento, where she was found with Pearmain on April 30, the complaint said. He was immediately taken into custody, and the girl was placed in protective custody.

Authorities said they also found a black notebook in Pearmain's possession with a script apparently for the girl to read from if confronted by police.

Balletto was taken into custody on May 1 when he was found in a trailer on the property that had been under surveillance.

According to the complaint, the minor said she worked for Balletto by trimming the marijuana plants on what she referred to as the "farm."

The girl then went on to describe an ordeal of being held in the box twice "for a total of approximately three days," according to the complaint. She said both men "engaged in multiple sex acts with her," and Balletto "told her she was a 'trooper' because she didn't scream in the box," the complaint said.

"A poem signed by (the girl) found in Balletto's trailer described her life as being locked inside a box with holes in it," the complaint added.

At the property, authorities found the two greenhouses with 970 individually potted and irrigated marijuana plants, according to the complaint. Authorities later found a third greenhouse with an additional 346 plants.

Lake County Sheriff's Department Lt. Chris Chwialkowski said the stash was one of the largest collection of weapons seized in his department's history.

Tatum King, acting special agent in charge of investigations for the Homeland Security office in San Francisco, which mounted the federal narcotics investigation, said, "The criminal groups involved in growing and trafficking marijuana have repeatedly shown they have no qualms about using violence and intimidation against those who get in their way.

"In this case the alleged victim was only 15 years old."