Flood Waters Raging from Vegas to Philly; Hawaii Next 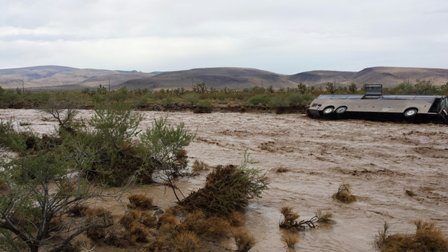 (CNN) -- Severely soggy weather soaked the East Coast to the West over the weekend, stranding travelers, washing out roads and claiming two lives.

And while the U.S. mainland cleared, Hawaii braced Monday for Tropical Storm Flossie, as the weakening, but still potent system closed on the island chain.

Life-threatening flash floods and mud slides are forecast as the storm threatens to dump up to 15 inches of rain, the National Hurricane Center said.

The drownings happened Saturday after 4 inches of rain fell over five hours, prompting officials to declare a state of emergency in Catawba County.

Delilah Lovett, 10, of Charlotte and Juan Alberdi, 48, of Huntersville -- members of different families who were visiting the area together -- were both swimming in what is known as the "bathtub" on Wilson's Creek in Caldwell County around 6:15 p.m., the Caldwell County Sheriff's Office said.

Rain, which had already stopped, raised Wilson Creek 2 feet above normal levels and created "very swift currents" and carried them away, according to a statement from the sheriff's department.

Kayakers found Delilah's body nearly an hour after she disappeared, it said.

Search and rescue crews found Alberdi on Sunday, about a quarter mile north of where they were first told he went into the water, according to LouAnne Kincaid, a spokeswoman for Caldwell County.

Record-setting hit Philadelphia International Airport, dumping nearly 8 inches of rain in just 6 hours. The storm knocked out power to parts of the airport, leaving some folks in the dark.

It was more of the same out West as heavy rain mixed with hail pounded the Las Vegas area.

The system also triggered a flash flood near the Grand Canyon, flipping a tour bus on its side and sweeping it 300 yards downstream. All 33 passengers crawled out a window to safety.

CNN's Janet DiGiacomo and Greg Botelho contributed to this report