Obama: I Won't 'Twiddle My Thumbs' Waiting for GOP 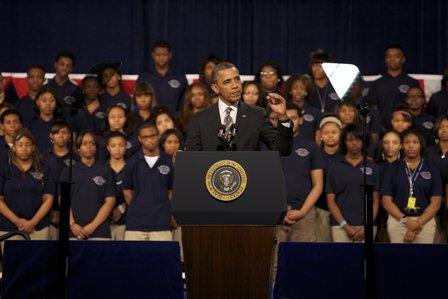 (CNN) -- President Barack Obama explained why, amid a series of executive branch controversies, his renewed focus on the economy matters: it's not only about financial stability, but about equal opportunity.

The message he sees as "jobs and justice" from the Rev. Martin Luther King Jr.'s March on Washington 50 years ago still rings true, Obama told The New York Times in an interview published Saturday evening.

To the many Americans who today are uncertain about their future, the 1963 march taught valuable lessons on racial equality and opportunities for "working folks," he argued.

The remarks, days after the president spoke on race and the Trayvon Martin case, came while he was on a campaign-style economic tour.

"Racial tensions won't get better; they may get worse, because people will feel as if they've got to compete with some other group to get scraps from a shrinking pot" if individuals do not see a stable fiscal future, Obama said.

Obama's midweek schedule looked familiar to watchers of his 2012 campaign and first White House term, when he favored speaking to crowds at colleges and businesses around the nation over Washington venues when advocating his economic priorities.

After visiting universities in Illinois and Missouri and speaking on the importance of education to the economy, he flew to the port in Jacksonville, Florida, where he called for investment in infrastructure. On Monday, he will speak at a Tennessee shipping center about manufacturing, jobs, and economic growth; then on Wednesday, he will travel to Capitol Hill to meet with Democrats in the House and Senate.

He cast aside the questions about such issues as the National Security Agency leaks, Internal Revenue Service political scrutiny and U.S. handling of the Benghazi, Libya, attack last September. "With an endless parade of distractions, political posturing and phony scandals, Washington has taken its eye off the ball," he said, although he was not specific about which controversies he was referring to.

The White House plans to continue the economic push into the fall.

In the same time frame, he is also expected to make perhaps the most important economic decision of his second term: naming a new individual to chair the Federal Reserve. Ben Bernanke's term as chairman is set to expire in January.

Obama told the Times he wanted someone who would go beyond tracking inflation and focus on market stability.

"The idea is to promote those things in service of the lives of ordinary Americans getting better," he said. "I want a Fed chairman that can step back and look at that objectively and say, Let's make sure that we're growing the economy."

He disputed Republicans' claims about job creation should the controversial Keystone pipeline from Canada to the Gulf Coast be constructed. The 2,000 temporary construction jobs he predicted - far less than the 20,000 some Republicans have said to expect - would be a "a blip relative to the need" for job creation.

He suggested that concerns over the pipeline's environmental impact could be addressed to his satisfaction because "there is no doubt that Canada at the source in those tar sands could potentially be doing more to mitigate carbon release."

In the interview, the president acknowledged that people are "anxious" and "frustrated" about their own financial future even while the economy overall improves.

Some do not see the potential for upward mobility, which he called "part and parcel of who we were as Americans."

It predates the fiscal crises of the last decade, he said, and despite the bloated national debt, the federal government's austerity measures have hurt the government's ability to effect change in diverse areas such as climate change and immigration.

"I want to make sure that all of us in Washington are investing as much time, as much energy, as much debate on how we grow the economy and grow the middle class as we've spent over the last two to three years arguing about how we reduce the deficits," he said, blasting what he called "a damaging framework in Washington."

And he issued a stern warning to Capitol Hill Republicans: "I'm not just going to sit back if the only message from some of these folks is no on everything, and sit around and twiddle my thumbs for the next 1,200 days."

A series of polls this month have shown Obama's approval rating is below the 50 percent mark. But his scores -- in the mid- and upper-40s -- rank well above those of Congress, which came in at 21 percent and 12 percent approval in two surveys conducted about a week ago.