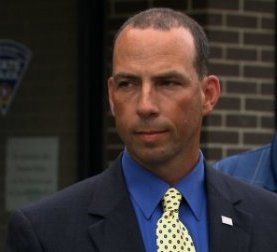 A Massachusetts State Police sergeant will be on desk duty pending the outcome of an internal investigation over his unauthorized release of photos showing the hunt and capture of one of the Boston bombing suspects.

The sergeant said that a recent cover on Rolling Stone was "an insult" to the victims of the April terror attack because, in his view, it didn't portray Dzhokhar Tsarnaev the right way.

Murphy was "furious" with the Rolling Stone cover photo of Tsarnaev, the Boston magazine story said, so the sergeant, a tactical photographer, provided the publication with grittier pictures from the harrowing hours after the bombing. These included an image of Tsarnaev during his capture with his face buried in his arm and what appears to be a red laser trained from afar on his head.

Hours after the Boston magazine story appeared online, Murphy was relieved of duty with pay for a day, and State Police spokesman David Procopio told reporters that a hearing Tuesday before three state police commissioned officers would determine the sergeant's status.

After the hearing Tuesday, attorney Leonard Kesten stood beside Murphy along with Dana Pullman, president of the State Police Association of Massachusetts.

Pullman told reporters that Murphy had been placed on restricted duty, which he explained meant desk duty. Murphy is no longer a photographer, Procopio said.

Kesten said that after the internal investigation into the release of the image is complete, "terminating" Murphy "would be the wrong message to send to everyone."

"I don't see Sgt. Murphy being terminated for this particular set of circumstances," he said.

A 25-year veteran of the state police, Murphy had worked most recently in the agency's public information office, covering many major operations, Alben said.

The sergeant has been an "exemplary" employee with no disciplinary record. "There no blemish there," Alben continued. "He's a man of character. He's a man of honor."

Alben said he had no reason to doubt that Murphy was "motivated by his own conscious and his own feelings about what occurred."

Kesten said that Murphy's actions would not affect the prosecution of Tsarnaev. "The guy was captured live on TV -- helicopter shots," the lawyer said.

But Alben was firm.

"If we get into a situation where we allow employees to cherry-pick and to choose what confidential information can be shared with the public or the media, impeding investigations or prosecutions, then we've lost integrity of the Massachusetts State Police," he said.

The sergeant's teenage son also stepped in front of microphones to tell reporters that he was fully behind his father.

"My dad's kind of always been a huge hero to me, and throughout this process he's shown the characteristics that I hope to some day model myself after," Connor Patrick Murphy said. "If I could be one-fourth the man he is now, then I could be happy with my life. Couldn't be prouder."

The Rolling Stone cover showed Tsarnaev with tousled hair and a peaceful-looking face.

"This guy is evil," Murphy was quoted in the magazine. "This is the real Boston bomber. Not someone fluffed and buffed for the cover of Rolling Stone magazine."

In the span of five days, more than 58,000 people have "liked" a Facebook page supporting Murphy, calling him a hero and lambasting the idea that his bosses would harshly discipline him.

A message about the outcome of the hearing Tuesday got more than 700 "likes" within a couple of hours.

"If the powers that be do the right thing, they'll give Sgt. Murphy a medal, a long weekend off with pay, a new camera, and an apology," Richard C. Martin posted on the Facebook page. His comment alone garnered 160 likes.

"I support Sgt. Murphy for standing up for the victims," posted John W. Patterson, calling him "a true hero for doing what he thinks is right."

But there were a few people who understood why the trooper is in trouble.

Darin Vance, a 16-year-old from West Virginia, posted, "I hate to see him lose his job, but what he did really was illegal; those pictures were not his, since he took them for his employer. Therefore, legally speaking, he stole the picture, and published it. I guess it depends how his contract was set up, but I think all copyrights would have been given over to the state."

Vance reiterated his support for the trooper to CNN on Monday and said he worried the Rolling Stone cover might inspire someone to commit an act of terror hoping to land on the front of a legendary magazine.

On Monday, CNN reached a woman who said she was the organizer of the page but would only give a first name -- Lisa. She said she felt compelled to create the page because her father was a Massachusetts State Police trooper.

"I thought this page would only be popular among my friends, but I'm getting private messages from people across the country, in Germany and in England, all over, who believe this trooper did the right thing," she said. "I was so angry when I heard that Sgt. Murphy was going to suffer for trying to stand up for victims."

Before quoting Murphy in several long passages, Boston magazine wrote: "Here, in his own words, Murphy shares his thoughts on the Rolling Stone cover. He stresses that he is speaking strictly for himself and not as a representative of the Massachusetts State Police."

John Wolfson, Boston magazine's editor-in-chief, said the magazine has hundreds of photos similar to the ones Murphy provided and will publish more in its September issue.

He said Murphy was "conflicted on some level" about releasing the photos but "genuinely worried" about how the Rolling Stone cover will affect the victims' families.

The Rolling Stone cover unleashed a wave of intense reaction on social media that played out in brick-and-mortar stores. Three prominent New England-based businesses -- CVS pharmacies, Stop & Shop and Tedeschi Food Shops -- were among those that heard the public outcry and announced they would not sell the print edition of the magazine.

Some have defended the cover, arguing it draws much needed attention to a young man who seemed an unlikely terrorist. Rolling Stone issued a statement saying the story "falls within the traditions of journalism and Rolling Stone's long-standing commitment to serious and thoughtful coverage."

"The fact that Dzhokhar Tsarnaev is young, and in the same age group as many of our readers," the statement read, "makes it all the more important for us to examine the complexities of this issue and gain a more complete understanding of how a tragedy like this happens."

Tsarnaev has pleaded not guilty to federal charges in connection with bombings and is awaiting trial. His brother Tamerlan, suspected to have helped carry out the attack, was killed during a gunbattle with police.