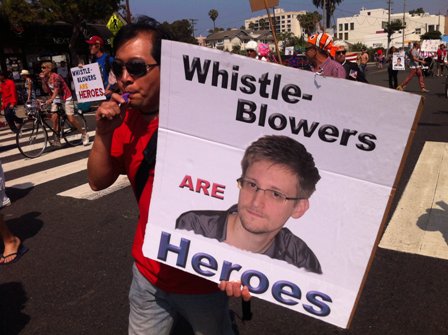 WASHINGTON (CNN) -- A top-secret court has renewed the authority of U.S. national security officials to collect telephone data as part of an anti-terror surveillance program that was exposed by intelligence leaker Edward Snowden.

In an unprecedented disclosure, the Office of the Director of National Intelligence said it had decided to declassify and announce the program renewal, which occurs periodically but is never publicized.

Snowden leaked classified information about the National Security Agency program to media outlets last month and then fled the country. He has been charged with espionage and remains in diplomatic limbo at the Moscow airport after seeking temporary asylum.

His detailing of the surveillance effort that required communications giant Verizon to turn over caller information triggered outrage from civil libertarians, certain members of Congress and privacy groups concerned with the sweeping nature of the telephone snooping and a companion effort that monitors e-mails.

Officials have said metadata on overseas-related communications does not include content but provides information about numbers dialed and received as well as length, date and time of calls.

President Barack Obama says the government is not listening in on calls, and other officials have said said the massive collection program has helped to detect terror plots.

The national intelligence office did not say when the periodic renewal order from the Foreign Intelligence Surveillance Court was handed down, but NSA legal authority under the Patriot Act to collect telephone metadata surveillance was due to expire on Friday.

The new transparency appears to be an effort by the Obama administration to be more forthcoming about the program, the administration of which was sharply criticized this week by members of the House Judiciary Committee.

One influential Republican member of the panel, troubled by the sweeping nature of how the telephone surveillance had been carried out, questioned whether Congress would act when the surveillance program comes up for renewal in 2015.

Following the Snowden leaks, certain information about telephone collection was declassified "in order to provide the public with a more thorough and balanced understanding of the program," a statement from the national intelligence office said.

"Consistent with his prior declassification decision and in light of the significant and continuing public interest" in the matter, the office decided to declassify and disclose publicly that it had filed an application to renew telephone metadata collection "in bulk" and that the court "renewed that authority."

"The administration is undertaking a careful and thorough review of whether and to what extent additional information or documents pertaining to this program may be declassified, consistent with the protection of national security," the statement said.

Although Verizon was singled out in the Snowden leak on telephone surveillance, it is believed that the government obtains similar orders for other telecommunications providers. All must be periodically renewed by the FISA court.

No communications companies were mentioned in the intelligence office statement on Friday.