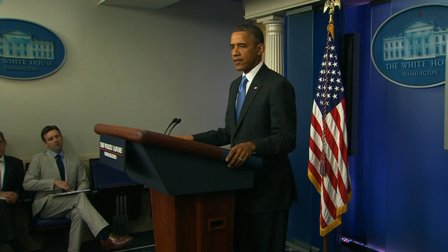 WASHINGTON (CNN) -- In some of the most personal and unscripted comments on race of his presidency, President Barack Obama broke his silence Friday with surprise remarks from the White House on Trayvon Martin, his first public comments since a Florida jury acquitted George Zimmerman in the teenager's shooting death.

But across the country, different audiences appear to have heard very different things in Obama's remarks.

From social media to comments on the Web to on-air discussions, Obama's remarks were seen as both "a truly historic moment" and simultaneously said to have been "fanning the flames of racism."

"So much for this president 'transcending' race," said conservative commentator Tara Setmayer on her Facebook feed. "Obama's comments as President of the United States today were quite provocative and racially inflammatory."

Robert Camacho had just the opposite feeling, commenting on CNN.com. "Thank you Mr. President. I am proud of you taking the first step, is up to ALL of US to stop this."

But Tasha Wells shot back on Facebook: "STOP RACE BAITING!!!!! He is not guilty. Stop this mad witch hunt!"

CNN senior political analyst Gloria Borger focused on the tone Obama took, saying that the president was speaking from the heart, "not using a teleprompter, like we very often see this president using. The words that come to mind are heartfelt," she said. "Very sober about this. Talking about how African-Americans look at this case through a history that doesn't go away."

"I hope he follows that up with action ... in any way that he can," Agnew said.

Agnew praised the president for "lending his voice to the situation" and "showing some bravery and showing some leadership at the top." He added that "we're hoping other leaders, including our governor, follow suit."

Gov. Rick Scott met overnight Friday with Dream Defenders protesters staging a sit-in at the governor's office and defended his position not to amend the controversial law. The protesters said they will continue their sit-in until their demand is met.

Obama last dealt with themes of race head-on as a presidential candidate in 2008, when he talked about his own struggles with race during a speech at Constitution Center in Philadelphia.

"At various stages in the campaign, some commentators have deemed me either 'too black' or 'not black enough,'" he said then.

Donna Brazile, a CNN contributor and former head of the Democratic National Committee, responded on Twitter to Obama's comment that he didn't see a need for politicians to lead a national discussion on race.

Responding to Obama's comment that he didn't "think it's particularly productive when politicians try to convene discussions" on race, she tweeted "Agree with #POTUS."

Ben Ferguson, a conservative commentator and CNN political contributor, was surprised that Obama even addressed the issue of race.

Both others pushed back.

"This isn't something that Black men make up or want to happen," said CNN's Don Lemon. "If you have the most powerful African-American man in the world telling you that there is a problem -- there's nothing in this politically for him -- perhaps people like Ben Ferguson ... should listen, should sleep on it, before they react and deny the context of what could have happen to Trayvon Martin and what could be, what is happening to most African-American men in this country."

According to a recent Gallup poll released before the Zimmerman verdict, 52% of African-American are dissatisfied about how blacks are treated by society, while 47% say they are satisfied.