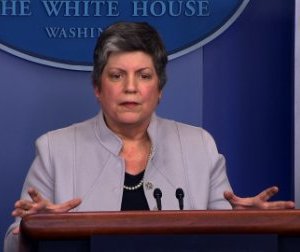 Homeland Security Secretary Janet Napolitano announced Friday she is resigning and will be nominated to become president of the University of California system.

In an e-mail to associates, Napolitano said she will leave the Department of Homeland Security in September.

"Departing a job and community you love is never easy, but I am passionate about educating the next generation of leaders and the University of California is like no other institution in affording such an opportunity," her e-mail said.

She graduated from the University of Santa Clara in California in 1979 as its first female valedictorian.

Napolitano, 55, was confirmed as the nation's third homeland security secretary and the first woman to hold the post the day after President Barack Obama took office in 2009.

In an earlier statement Friday, she called working with homeland security personnel who protect the nation "the highlight of my professional career."

Obama thanked Napolitano for what he called outstanding work in dealing with "some of the toughest challenges facing our country."

He cited her leadership in recovery efforts from natural disasters such as Superstorm Sandy, dealing with the volatile immigration issue and protecting the nation against terrorist attacks.

"I've come to rely on Janet's judgment and advice, but I've also come to value her friendship," Obama said, wishing her luck "as she begins a new chapter in a remarkable career of public service."

A breast cancer survivor, Napolitano was attorney general and then governor of Arizona before joining Obama's Cabinet.