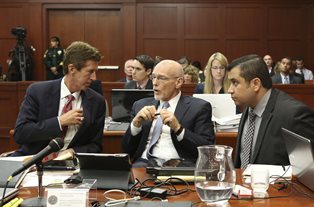 (CNN) -- Jurors in the George Zimmerman second-degree murder trial will be allowed to consider at least one lesser charge -- manslaughter -- when they get the case after closing arguments, Judge Debra Nelson ruled Thursday.

But she put off a decision whether they could consider a charge of third-degree murder after attorney Don West offered fierce objection to the charge, which prosecutors said is based on the idea that Zimmerman committed child abuse in killing 17-year-old Trayvon Martin.

"Oh my God," he told Nelson. "Just when I thought this case couldn't get any more bizarre, the state is seeking third-degree murder based on child abuse."

Prosecutors are seeking the additional charges to give jurors more options should they find Zimmerman didn't commit second-degree murder when he killed Martin on February 26, 2012.

In arguing unsuccessfully against the manslaughter charge, West told Nelson that Zimmerman believes that because the "state has charged him with second-degree murder, they should be required to prove it, if they can."

Closing arguments in the case were expected to begin Thursday afternoon, after attorneys finish arguing over legal points in the jury instructions -- including decisions on explaining justifiable use of force and Florida's controversial "Stand Your Ground" law.

The law provides legal protections to people who use deadly force against attackers when faced with a fear of death or serious harm.

Zimmerman, 29, has never denied shooting Martin. But he's contended that he did so in self defense, portraying himself as the victim and Martin as the aggressor.

But the late teen's backers say the shooting could not be justified, with activists leading widely attended rallies and taking other steps urging authorities to press charges. Faulting Zimmerman for ignoring a 911 dispatcher's direction not to follow the teen, they believe Zimmerman profiled Martin because he was black.

Many of those arguments, on both sides, will likely play out during closing arguments.

Those start Thursday afternoon, when Bernie de la Rionda makes the prosecution's case for up to two hours. Defense lawyer Mark O'Mara will make his case for up to three hours Friday morning, followed by a rebuttal of up to one hour from prosecutor John Guy.

Later Friday, the case will be in the hands of the all-female jury.

No testimony from Zimmerman

Zimmerman, from his comments to police to the arguments of his lawyers, has steadfastly maintained he shouldn't be found guilty of murder, contending he shot the teen in self-defense.

But jurors weighing his fate won't hear that from him directly.

On Wednesday afternoon, Judge Debra Nelson asked Zimmerman if he'd made a decision about taking the stand in his own defense.

"After consulting with counsel," Zimmerman replied, he'd decided "not to testify, your honor."

Moments later -- and after Nelson refused a request from Zimmerman's team to dismiss the case before the jury could weigh in -- the defense rested its case.

That means the last witness the jury will have heard from is Robert Zimmerman, George's father.

He testified -- like his wife, Gladys, had earlier in the trial -- that he believes it was his son who was screaming on the infamous 911 recording of the altercation that ended in Martin's death.

Contrast their testimony to that of Martin's mother, Sybrina Fulton, who said she was "absolutely" certain that the panicked voice was that of her son. The late teenager's brother, Jahvaris Fulton, made a similar declaration in court.

Defense attorneys argue Zimmerman shot Martin in self-defense after the teenager charged him. Prosecutors argue Zimmerman followed Martin through his neighborhood and shot him without provocation.

The star Wednesday may have been a foam dummy.

O'Mara grappled with the life-size model inside the courtroom, working to show rapt jurors the competing versions of what happened the rainy night Martin was killed.

Assistant State Attorney John Guy brought out the dummy in an effort to demonstrate that it would have been difficult for Zimmerman to retrieve his handgun from his pocket with Martin straddling him, as defense attorneys have argued was the case.

"It could be consistent with any kind of movement ... We weren't there so the info that we have is George Zimmerman's statement," he said.

Later, O'Mara straddled the dummy himself, pounding the back of its head against the carpeted courtroom floor, demonstrating how he says Martin gave Zimmerman the head wounds seen in police photographs from the night of the shooting.