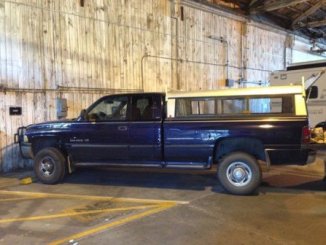 Why would someone allegedly steal a pickup truck and guns in Montana and then go to the University of Washington area with Molotov cocktails and a bullet-resistant vest?

Police say they're trying to figure that out.

University officers arrested a 21-year-old Nevada man on Wednesday night after finding him near the Seattle school in a truck that had been reported stolen recently from a Butte, Montana, residence, campus police Chief John Vinson said Thursday.

Investigators found Molotov cocktails, a ballistic vest and two allegedly stolen guns -- a scoped rifle and a shotgun -- in the truck's bed after getting consent to search it, Vinson told reporters.

Vinson said he believed no ammunition was found. Investigators were trying to get a warrant to search the truck's cab Thursday, university police said.

"We have no idea what his intentions were," Vinson said. "... We don't have any information that would suggest any type of attack, but this is an active, ongoing investigation."

The man's name was not released. Police said that he is not a University of Washington student and that they're trying to figure out whether he has any connections to the area, and why he was in Seattle.

Police initially found him sleeping in the truck on campus on Tuesday, a day before the arrest, Vinson said. At the time, a check of the plate found nothing, so they sent him on his way.

But on Wednesday, "the vehicle was entered as stolen from Montana," so officers looked for the vehicle and stopped it not far from campus at about 10:30 p.m., Vinson said.

Police arrested the man on suspicion of driving a stolen vehicle.

Vinson said he had no reason to believe the university -- which he said had few students or staff heading into the Fourth of July -- is under any threat. But police still have questions.

"Anytime that you have someone who has body armor ... long guns and also incendiary devices, that's a significant concern," said Jim Pugel, interim chief of the Seattle Police Department, which is helping university police in the case.

The FBI also is assisting the probe, Vinson said.

CNN's Amanda Watts and Jason Hanna contributed to this story.