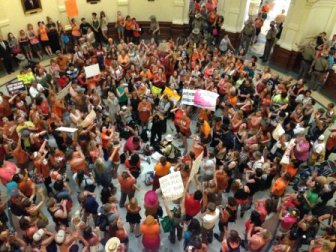 The battle over Texas' attempts to change its law on abortion ran well into the night at the state capitol in Austin, with thousands milling around, all wanting to be heard during a public hearing.

People representing both sides of the issue signed up to testify Tuesday at a House committee meeting on HB2, a bill that would impose strict new regulations on abortions in the state.

The measure seeks to ban abortions past 20 weeks of gestation, mandate abortion clinics to become ambulatory surgical centers, and require doctors who perform abortions to have admitting privileges at a hospital within 30 miles of the clinic at which they're providing abortion services.

Critics said the measure would shut down most abortion clinics in Texas, denying access to many, while proponents say it will raise the standard of care for women in Texas.

It was a heated night and middle ground was hard to come by. Anti-abortion activists, all wearing blue shirts, joined together in shared prayer, telling stories of how abortions destroy lives.

"In 1979 I paid a registered physician $300 to kill my second child. I hated myself it almost destroyed me," Susan Collins said.

Nearby, abortion rights activists, dressed in orange, tried to drown out their opponents with drumming, cheering, and chanting slogans about personal liberty. The opinions of many were summed up by a young woman who yelled, "I'm (expletive) tired of men trying to tell me what I can and cannot do with my body!"

The initial House bill failed last week after a day and night of drama in which state Sen. Wendy Davis, D-Fort Worth, talked for more than 10 hours in an attempt to run out the clock on the legislative session.

But Gov. Rick Perry called a special session so the legislature could take up the measure again.

Almost 2,000 people signed up to speak for three minutes, but by the end of the night, fewer than 100 were able to share their thoughts with the committee.

Registered nurse Vivian Femmy, who works at a pregnancy crisis center, said she supports the measure.

"I have been there on the front lines with the woman we are talking about today," she said. "I am pro-choice, and I am pro-woman. I am pro-woman getting the kind of abortion care that is the finest care she can get. I support this bill because of what it will do to improve medical standards."

Elizabeth Grune arrived at the capitol at 8 a.m. and finally got her chance to speak at 6:45 p.m.

"Christians, we need the separation of church and state," she said. "I don't believe in abortion but it is legal and as such all women deserve equal access."

The room used by the House committee filled almost immediately, and most people watched the proceedings in nine other rooms.

One man who had been waiting to speak against the bill for hours angrily stormed out of the committee room when testimony was closed.

"My grandmother died from a back alley abortion!" he shouted. Many abortions rights activists fear the legislation would restrict access to safe abortions and make women turn to more dangerous methods.

Outside of the hearing room in an outdoor courtyard, it was prayer circles versus drum circles for more than eight hours.

At the end of the night, with more than 1,000 people still waiting to testify, the bill cleared the committee with an 8-3 vote.

The Texas Senate must now vote on the version of the bill in one of its committees before both bills can be brought to the full House and Senate floors.

A final vote is expected next week.