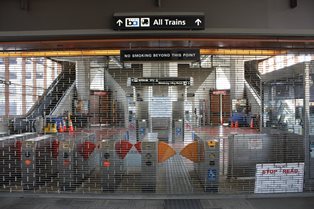 (CNN) -- The strike that shut down public transit in California's Bay Area is delivering a blow to the economy.

As the shutdown enters its second day, a conservative estimate puts the cost at $73 million per day, the Bay Area Council Economic Institute said.

That figure comes only from lost worker productivity and does not include overall lost economic activity, "which could add tens of millions of dollars," council President Jim Wunderman said.

The council describes itself as "a partnership of business with labor, government, higher education, and philanthropy that works to support the economic vitality and competitiveness of the Bay Area and California."

The strike began at midnight Sunday after union leaders walked out of negotiations with BART hours before their four-year contract was set to expire.

"We are sorry peoples' lives have been disrupted by the union strike," Rice said Monday after the morning commute. "This strike is not necessary and we call on union leaders to end it and join us at the table so the Bay Area can get moving again."

"This is a labor, community, people-of-conscience uprising. It is our ultimate goal to ensure that the truth about the budget and pots of money hidden from the public be exposed for the benefit of the true owners: the citizens of Oakland and the Bay Area."

BART is the nation's fifth-largest rail system with 44 stations in four counties and 104 miles of lines, CNN affiliate KPIX reported, adding that the transit system handles more than 40% of Bay Area commuters "in what transportation officials noted is the second-most congested region in the nation."

A study last year found San Francisco among the 10 cities with the worst commutes.

More than 7 million people live in the Bay Area, according to 2010 census figures.

The dispute centers on pay and benefits.

But Roxanne Sanchez, president of SEIU for the region, said workers are fed up.

"Years of layoffs have affected public safety and services. Crippling cuts have not just made our jobs more difficult, but put undue strain on our livelihoods, our families and our communities," she said in a statement posted on SEIU Local 1021's website..

"Believing in good jobs that pay fair wages, offer health care and a secure retirement --- these are modest ideals. These are UNION ideals."