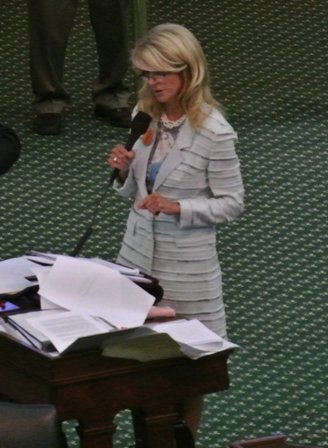 Less than a week after a one-woman filibuster and a raucous crowd stymied new abortion legislation that would have been among the most restrictive in the nation, Texas lawmakers will return Monday for a second special session.

The legislature reconvenes at 2 p.m. (3 p.m. ET), but not before thousands of opponents rally at the Texas Capitol.

"Now we must stand together again to demand justice for all women in Texas," proclaims the event's Facebook page, which shows more than 6,000 people committed to attending.

Headlining the rally is state Sen. Wendy Davis, a Democrat from Fort Worth and leader of last week's filibuster and newly minted heroine for abortion rights advocates.

Gov. Rick Perry announced he was calling the legislature back to Austin a day after the Texas Senate failed to vote on the bill before a midnight deadline.

"We will not allow the breakdown of decorum and decency to prevent us from doing what the people of this state hired us to do," Perry said in a statement calling lawmakers back into another special session.

The bill failed after a night of drama in Austin during which a lone lawmaker talked for more than 10 hours in an attempt to run out the clock on a special session.

Chants of "shame! shame! shame!" from spectators who had filled the building drowned out the efforts of Republican lawmakers as they tried to pass it minutes before midnight.

Though Republicans control the state Senate, Davis tried to block the abortion bill by attempting a 13-hour filibuster on Tuesday.

"I underestimated how difficult it would be -- both physically and mentally," Davis told CNN's "AC360" last week. "About two hours in, I realized I was in for a long day. My back started hurting pretty early on and began to really hurt as the hours ticked by."

But, she said, the energy from the packed gallery "kept me going throughout the day."

Davis fell short of her goal by less than three hours when the chair ruled she had gone off topic. The gallery erupted in boos. Her fellow Democrats stalled for time with procedural tactics.

And as the clock wound down, opponents of the bill drowned out proceedings on the floor, preventing lawmakers from completing a vote in time to get it passed.

At 3 a.m., Lt. Gov. David Dewhurst stepped to the Senate floor to declare the bill dead and the special session over.

In a series of radio interviews Monday, Perry said the lieutenant governor and the speaker are not going to allow "turmoil" and "mob rule" in their chambers.

The shouting, which Perry described as "unprecedented anarchy" marked an unprecedented moment in the capitol, but the governor insisted it won't derail the bill.

"Regardless of whether there is a vocal opposition ...Texans and their views will prevail," he said.

The virtual debate over the legislation has been less than civic at times, with supporters coalescing around the Twitter hashtag #stand4life and opponents using #standwithwendy, in honor of Sen. Davis, as their rallying point.

"WE ALL know all abortions are NOT for mother's health, but simply bc they don't want a baby then. Farce to protect baby murder. #Stand4Life," said a post from Rhonda Nelson.

As the Texas governor called for the special session, Perry and Davis have continued to spar.

Perry claimed Davis ignored her own past as the daughter of a single mother in her bid to prevent abortion rights from being restricted in the Lone Star State.

"I'm all about honest, open debate," Perry said at a national "Right to Life" convention in Dallas last week. "Parliamentary tactics are certainly nothing new. But what we witnessed Tuesday was nothing more than the hijacking of the Democratic process. And this is simply too important a cause to allow the unruly actions of a few to stand in its way."

Perry argued Thursday that biography should instead have provided Davis guidance in her personal views on abortion.

"The fact is, who are we to say that children born into the worst of circumstances can't grow to live successful lives?" Perry said. "In fact, even the woman who filibustered in the Senate the other day was born into difficult circumstances. She was the daughter of a single woman. She was a teenage mother herself. She managed eventually to graduate from Harvard Law School and serve in the Texas Senate. It's just unfortunate that she hasn't learned from her own example, that every life must be given a chance to realize its full potential and that every life matters."

"They are small words that reflect a dark and negative point of view," she continued. "Our governor should reflect our Texas values. Sadly, Gov. Perry fails that test."

The state senator told NBC News she hasn't "ruled out" the idea of running for governor next year but is focused on preventing the abortion bill from passing in the special session.

In her slew of recent media interviews, Davis has argued that Perry is simply trying to boost his political aspirations by being a big voice in the abortion battle.

Asked about Davis on Monday, Perry, who hasn't announced whether he'll run in 2014, told KFYO the issue is about a debate over life and women's health, not "someone's political future."