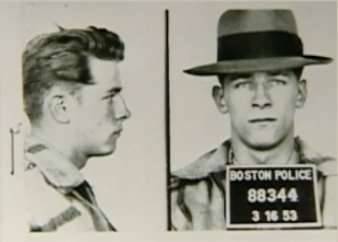 Reputed mob boss James "Whitey" Bulger, visibly annoyed, muttered under his breath "You're a f---ing liar" Thursday as a disgraced former FBI supervisor testified that there was "no question" the Irish gangster doubled as an informant for FBI Boston.

Prosecutor Brian Kelly requested that the judge in Bulger's federal trial advise Bulger to "keep his little remarks to himself," which Judge Denise Casper advised shortly after.

Both sets of attorneys have spent a remarkable amount of time during the trial of the notorious Bulger, charged with 19 murders and in court after living in hiding for 16 years, trying to prove whether Bulger was an informant during a 15-year period. Even Judge Casper is beginning to question the importance of the issue.

During post-court discussion over motions, as the defense was attempting to further it's argument that Bulger's informant records were forged by his FBI handler, Judge Casper questioned, "How does that address that your client is not guilty of crimes here?"

Bulger's attorney J.W. Carney danced around the question and responded, "Bulger was not providing information as an informant, he was providing money so that he'd get tipped off about wire taps and search warrants."

Bulger's attorneys have been quick to admit to acts of extortion and racketeering -- charges Bulger is also facing -- to defend their client's position that he was not another "rat" from South Boston.

"Why can't both be true?" Judge Casper inquired.

"The defendant's position is (that) only one is true." Carney said. "Why would James Bulger be paying all this money to all these people if the government's theory is he got all this protection because he was providing information. Why would he keep paying everybody?"

Former FBI supervisor John Morris, an addition to the government's long list of cooperating witnesses, testified Thursday that he took bribes from Bulger in the amount of $7,000, along with a silver-plated champagne bucket and two cases of imported wine.

Morris said he asked Bulger if he could "spring" for a plane ticket for his secretary girlfriend to visit him during FBI training in Georgia, and Bulger obliged. Morris admitted to his acts of corruption in 1997 in exchange for immunity.

A sheepish, red-faced Morris, though less than six feet away from Bulger, avoided eye contact with the defendant, who glared steadily at his old confidant throughout his testimony. This is the first time the two have seen each other since they cut ties in 1991 after Morris leaked Bulger's informant status to the Boston Globe.

Morris said he first met Bulger at a dinner he hosted his Lexington, Massachusetts, home in 1978 along with Bulger's FBI handler John Connolly, whom he characterized as his "best friend."

Morris said he met Bulger and later his associate Steve "The Rifleman" Flemmi eight to 10 times in various places, including Morris' home, Morris' girlfriend's apartment, a hotel, Bulger's home and even in Flemmi's mother's house for dinner. Flemmi's mother cooked. The defense has previously argued that Bulger was not treated like an informant, and thus did not believe that he was.

Morris testified that Connolly preferred to meet Bulger in "pleasant surroundings, not the type of surroundings you would meet a normal informant," like in a hotel or car. "He wanted Mr. Bulger to be comfortable," Morris said.

Morris was supervisor to rogue FBI agent Connolly, who is currently serving a 40-year sentence on second-degree murder charges for leaking the identities of witnesses cooperating against Bulger's Winter Hill Gang. Flemmi, serving a life sentence, is set to testify against Bulger later in this trial after agreeing to cooperate with the government to evade the death penalty in 1997.

All that Bulger and Flemmi wanted from their handlers in exchange for information was "a head start," as Morris described -- to be tipped off if they were going to be indicted or charged so they could flee. The pair, according to Morris, knew they were "fair game" and acknowledged that they were engaging in criminal activity and at some point they might get charged. If that happened, they didn't want their identity as informants disclosed and would rather "take the risk" Morris said.

Morris admitted to tipping his informants off to wire taps, and keeping their names out of a 1975 horse race indictment. He testified that the Mafia, or La Cosa Nostra, was the main priority of the FBI in Boston and that Bulger and his partner Flemmi were instrumental in the take-down of those mobsters. The two provided the agents with a drawing of Mafia headquarters, and that was used to take down the New England Mafia in a 1983 sting.

After being tipped off to an indictment, Bulger went on the run for 16 years and landed himself on the FBI's top 10 most wanted list before being arrested in his Santa Monica. California, home with his girlfriend in 2011.

Morris said that he signed off on reports Bulger provided to the FBI that he knew were false lies to protect himself from being implicated as the person to who leaked sensitive information that may have tipped Bulger off to witnesses that were cooperating against him. Those potential witnesses were eventually murdered, Morris said, and Bulger has been charged in their killings.

While the defense had little time to cross-examine Morris, who will be back on the stand Friday, defense attorney Hank Brennan painted Morris to be a liar, an adulterer, and a fraud. He was able to fire off a question that is likely to resound with the jury.

"You were corrupt, weren't you Mr. Morris?" Brennan queried.

"Yes," Morris exhaled after a long pause and a deep breath.