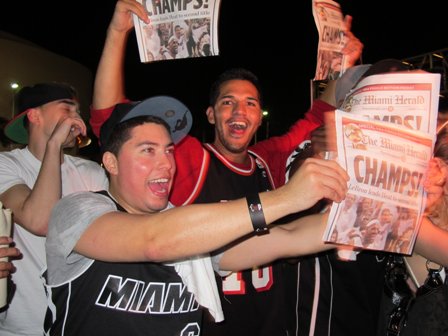 (CNN) -- It was a fitting end to a tense back-and-forth series that saw several unlikely players taking key roles. But ultimately, it came down to the top basketball player in the league.

He brought his talents to South Beach three years ago. On Thursday night, he silenced his critics -- at least until October -- by leading the Miami Heat to its second consecutive NBA title with a 95-88 win over the San Antonio Spurs.

The four-time league MP had a series-high 37 points, 12 rebounds and four assists to earn his second ring.

Heat coach Erik Spoelstra said James was the difference in winning and losing. He was ecstatic for the player from whom so much is expected.

"You're always happy for guys when they're so dedicated," he said. And we all know his work ethic. ... He always rises to the occasion when it matters the most, when the competition is fiercest."

James hit a long jumper with 27.9 seconds remaining in the game to give the Heat a four-point lead then locked up the win with two free throws after stealing a pass from the Spurs' Manu Ginobili.

Dwyane Wade chipped in 23 points for the Heat, who won their third title overall.

"This was the hardest series we ever had to play, but we're a resilient team and we did what it took," he said.

Reserve Shane Battier made six 3-pointers and had 18 points for Miami. James also had a team-high 12 rebounds in winning his second crown.

"LeBron was unbelievable; Dwyane was great. I just think they found a way to get it done," he said.

Duncan said he'll be haunted by two missed shots in the last minute, either of which would have tied the score.

Spurs guard Tony Parker, who went 3-for-12 in Game 7 and scored just 10 points, had no excuses, saying he just couldn't get a good shooting rhythm.

The Spurs' Danny Green, who in the first five games set a NBA Finals record for 3-pointers, went 1-for-12 from the field in Game 7.

Only five players scored for the Heat but four of them -- James, Wade, Battier and Mario Chalmers -- outscored the Spurs.