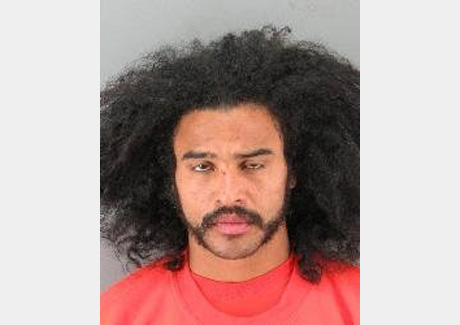 Here's hoping Yeiner Garizabalo wears more to court Tuesday than he did in a San Francisco subway station in May.
Link to Video: Caution not for under-18s
When last we saw him, the 24-year-old appeared in a bizarre video where he, sans clothing, performed acrobatics off subway equipment, then went after commuters trying to catch a train.

A video of the incident surfaced last week and quickly went viral.

In it, a glistening man with a wild mane of hair turns fare gates into balance beams, doing splits and back flips buck-naked. Startled commuters flee as he dashes across the station, attacking people at random.

Last week, police said Garizabalo had been arrested, given a mental evaluation, charged with battery and released.

California defines false imprisonment as "the unlawful violation of the personal liberty of another."

A judge set Garizabalo's bail at $100,000 after he was re-arrested Monday. He will be arraigned Tuesday afternoon, Bastian said.

Garizabalo, who is also known as Yeiner Perez, was, until recently, a member of the ClownSnotBombs Circus. The group posted a statement on its website saying he was no longer affiliated with the group.

"To our knowledge, Mr. Perez never exhibited this type of behavior previously and this episode came as a complete surprise to us," it said. "Our hearts go out to those who were impacted by this incident and Mr. Perez himself. We believe Mr. Perez has a medical issue and hope that he receives the medical help that he needs."