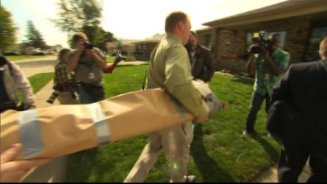 The FBI -- working on information from an aging reputed mobster -- will continue digging in the waist-high grass of a Detroit-area field Tuesday in yet another search for the remains of former Teamsters boss Jimmy Hoffa.

The information that sparked the latest hunt in the nearly four-decades-long search for Hoffa is "highly credible," a source familiar with the investigation said.

Agents were executing a search warrant for a field in Oakland Township, north of Detroit, based in part on information provided by alleged mobster Tony Zerilli.

The paperwork filed under seal that accompanies the search warrant is described as "several pages long," according to the source, and it explains thy the FBI believes the search is justified.

"The information provided by Tony Zerilli is highly credible," the source said.

By late afternoon, the search had been underway for several hours but there were no indications of any developments.

The search was on private property, and media and curious onlookers were kept some distance from the search site.

FBI Special Agent Bob Foley, head of the agency's Detroit office, told CNN at the scene that the information leading to the search "reached the threshold of probable cause, which was sufficient to allow us to obtain a search warrant.

"If it didn't rise to that level then, certainly, we wouldn't be out here."

Earlier this year, Zerilli, now in his 80s, told New York's NBC 4 that Hoffa was buried in a Michigan field about 20 miles north of where he was last seen in 1975.

The FBI has spent months looking into Zerilli's claims before seeking court authorization to excavate the field and look for evidence of a shallow grave, according to the source.

Contrary to what's been previously thought for years, Zerilli said he was told Hoffa's disappearance was not connected to Genovese family New Jersey crime boss Anthony "Tony" Provensano who allegedly wanted to get rid of Hoffa.

Instead, according to the source, Zerilli told the FBI Detroit mobsters wanted Hoffa dead.

At the time, Hoffa was thought to be setting the stage to get back into a power position with the labor movement after he was released from prison. He was convicted in 1967 for jury tampering and fraud. President Richard Nixon pardoned him in 1971.

Hoffa, then 62, was last seen on July 30, 1975, outside a Detroit-area restaurant. The FBI said at the time that the disappearance could have been linked to Hoffa's efforts to regain power in the Teamsters and to the mob's influence over the union's pension funds.

Zerilli was in prison himself when Hoffa disappeared.

Zerilli, according to the source, said he when he was freed, he asked a mob enforcer what happened to Hoffa.

The area being searched Monday was described as relatively small -- about the size of a small party tent, according to the source.

Hoffa's disappearance and presumed death have vexed investigators in the years since his last sighting. As recently as October, soil samples were taken from a home in the suburban Detroit community after a tipster claimed he saw a body buried in the yard a day after Hoffa disappeared.

The soil samples were tested, and showed no evidence of human remains or decomposition.

Zerilli, freed in 2008 after his last prison sentence, was convicted of crimes in connection with organized crime in Detroit. Keith Corbett, a former U.S. attorney, told CNN earlier this year that Zerilli headed a Detroit organized crime family from 1970 to 1975, but was in fact in prison when Hoffa disappeared.

In an interview with CNN affiliate WDIV-TV, Zerilli denied playing any role in Hoffa's disappearance.