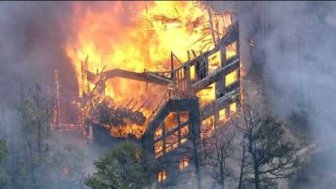 As hundreds of firefighters began to get the upper hand on a huge blaze near Colorado Springs, investigators stepped up their probe into the cause of the most destructive wildfire in the state's history.

Investigators are treating the 16,000-acre Black Forest Fire, which was 75 percent contained Monday, as a crime scene, though they don't yet know whether a crime was committed, El Paso County Sheriff Terry Maketa said.

Authorities are allowing more people to visit their homes by the day -- the mandatory evacuation area covered the homes of 4,100 people Monday, down from tens of thousands last week. But Maketa asked for patience from those still being kept out, citing not only the remaining hot spots, but also the need to preserve evidence.

"When you're talking about a potential for prosecution -- we don't know yet whether it's a crime or not -- we're going to treat it as (if) it is, and preserve every element of that scene as we can," Maketa told reporters Monday. "To allow people go in and trample through ... compromises our scene."

The Bureau of Alcohol, Tobacco, Firearms and Explosives has been called in, along with state authorities.

"We are zeroing in on the point of origin, and it's a very slow, methodical process," Maketa said. "We brought in additional experts to make sure we're not missing anything ... but I'm pleased with the process they are making."

Maketa's comments came after fire teams made significant progress against the flames northeast of Colorado Springs over the weekend, with containment growing from 5 percent to 75 percent in just a few days' time.

And rain could help in the next couple of days.

The National Weather Service says highs will be in the upper 70s through Tuesday, with a 30 percent chance of rain and light winds each day.

Temperatures in the 90s, little rain and blustery winds fueled the Black Forest Fire in its early days.

Maketa said Monday that no structures were lost in the fire Sunday.

"Another day of no growth in the fire, no lost structures, and we have begun an aggressive repopulation of some of the mandatory evacuated areas," he said.

In the first few days after the Black Forest Fire broke out, crews had zero containment on the blaze as it ravaged woods and neighborhoods. County spokesman Dave Rose told CNN it appeared to be the most destructive in the history of Colorado, a state that's all too familiar with devastating wildfires.

As of Monday, authorities had counted 502 structures lost to the blaze, which started Tuesday, according to the sheriff's department. Two people had died.

The speed and intensity of the flames created a pattern where, for the most part, homes either were destroyed or escaped unscathed, Maketa explained over the weekend.

In some areas, he said, there's no house, no mailbox and virtually no other signs that someone lived there just a few days ago.

"You can't even recognize where there was a house or some other kind of structure," the sheriff said Saturday. "That is the level of incineration and destruction that took place in some areas."

Firefighters also made significant progress on the Royal Gorge Fire, southwest of Colorado Springs, announcing it was 100 percent contained Sunday night. The fire scorched more than 3,200 acres, including a beloved carousel and at least 20 buildings, according to Gov. John Hickenlooper.

"It's burned to a cinder," he said Friday of the area.

The governor has declared a disaster emergency in Rocky Mountain National Park, northwest of Denver, due to the Big Meadows Fire that's burned hundreds of acres there.

The latest flare-up is the Ward Gulch Fire in the western part of the state. No structures have been reported destroyed in that blaze, but gusty winds, low humidity and warm weather have firefighters on edge.

While all those fires pose dangers in their own ways, the Black Forest Fire is still by far the biggest and the most dangerous, which is why thousands in that area remain evacuated, their homes in areas where it is too perilous to return.

Said Maketa over the weekend: "We're hoping to gain inches each day to get people's lives back to normal, where it can be returned to normal."