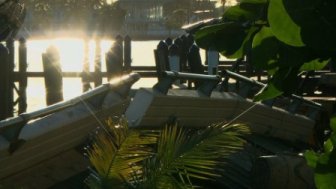 One moment, dozens of sports bar patrons were cheering the Miami Heat as they watched the NBA finals on a deck above South Florida's Biscayne Bay on Thursday night.

The next -- just as they stood to cheer a Heat basket, a hostess recalled -- the packed deck collapsed, spilling them into water.

About 100 people were on the deck of Shuckers Bar & Grill at the time of the collapse, Miami-Dade Fire Lt. Eugene Germain told reporters.

Authorities are treating 24 victims, three of whom have "critical injuries," Germain said.

Officials believe no one is missing.

Video from CNN affiliate WSVN showed fire trucks and ambulances at the scene, which was illuminated by a spotlight from a helicopter.

Rescue divers were also there. At least one patient on a stretcher was put inside a waiting ambulance.

The collapse is believed to have happened shortly before 10 p.m. ET. What had been the deck was largely unrecognizable after the collapse, video from CNN affiliate WFOR showed.

On its website, it boasts outdoor dining on a dock over Biscayne Bay and 23 high-definition flat-screen TVs. At the time of Thursday's collapse, the hometown Miami Heat were playing in San Antonio against the Spurs in the NBA finals.

Leah Masters, a Shuckers hostess, told WFOR that the deck collapsed just as people stood to cheer as the Heat scored.

CNN's Greg Botelho and Dana Ford contributed to this report.