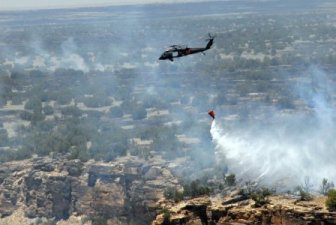 More than 375 homes have been destroyed in what authorities believe is the worst wildfire in Colorado history. Every single one of them has a story, and there are sure to be plenty more as Friday's forecast predicts more scorching heat and strong winds.

Bill and Karen Moreau are sitting in a hotel room 15 miles away from the home they planned to spend the rest of their lives in. For the past three nights, they've struggled to sleep, dreaming fitfully that they are again walking its 7,000 square feet of hardwood floors. They open their huge front doors, and are immediately soothed by the view from large windows, an expanse of lush timber.

"We had the most beautiful home," Karen Moreau said. "It's just so sad that it's gone."

As firefighters and a cavalcade of responders battle the Black Forest Fire near Colorado Springs, families like the Moreaus are torn between absolute gratitude that they are safe, and sorrow that they've nothing left of their homes besides memories.

Around 3 p.m. Tuesday, Bill Moreau got a call at work from a friend warning him that he'd better get home. The Black Forest Fire was headed toward his neighborhood.

That day, there was little indication that the fire would pick up as it has, moving with a ferocity that has shocked seasoned emergency professionals.

Moreau met his wife, Karen, and their 30-year-old son, Craig, at home and saw smoke billowing two to three miles away.

Just as Californians prepare themselves for an earthquake and Floridians for a hurricane, Colorado residents know what they need to grab from home in case of a wildfire.

Because the smoke seemed relatively far away, they thought they had time.

They grabbed their passports, birth certificates and some clothes. Bill got his computer.

Every year of their 34-year marriage, Bill has given her a Santa for Christmas.

For a moment, she thought about taking them.

So she left them.

The family had three cars, so each person took one. Lucy, the family lab, jumped into Karen's car.

Karen and Craig drove away, heading toward the Moreaus' other son's house about five miles away. That son, Kevin, and his wife, Sylvia, had a baby eight days ago.

Bill lingered a bit. He watched the fire with a local news photographer.

Suddenly, the fire lurched toward them.

"It went through the woods like a demon," he recalled. "It was hard to take your eyes away from it. The smoke didn't go straight up. It billowed, and it churned. It was like it had a life. It was chewing up the woods.

"You could hear propane tanks exploding," he said. "Every time [the fire] would hit a house, the smoke would turn jet black for a second. It ran through that neighborhood faster than you could run."

Moreau had to get out, and get out fast. So he pulled out and joined the thick traffic of other people trying to get out.

Not long after he arrived at his son Kevin and Sylvia's house, the fire had spread their way. Smoke was billowing above the couple's house.

Then, police cars raced up to the home, and officers told everyone to leave.

Kevin and Sylvia, concerned about their baby Emmet, tried to keep steady and calm.

They asked the Moreaus: What should we take?

The entire family jumped into their cars and took off. At this point, drivers were moving fast, and some seemed panicked.

"I almost got hit by someone pulling a horse trailer," Bill Moreau said.

About 15 miles south, they found a hotel far away from the fire.

On Wednesday, around 5 a.m., Bill Moreau was feeling anxious. He couldn't sleep. He was worried about his house.

The fire couldn't be that bad, he thought, at least not dangerous enough to keep him from driving in the direction of his home with Lucy in the front seat of his Jeep.

He parked about a mile away and hiked the rest of the way in.

Relief fell over him. The house was fine.

So Bill Moreau sat on his deck, sipped some water while Lucy slurped from her water bowl.

Before he left to return to the hotel, he even watered his wife's flowers.

Back at the hotel, he was feeling pretty good. Things were going to work out and they'd be home soon enough, he thought.

At around 5 p.m. Thursday, Kevin and Sylvia came charging down the hotel hall.

He, Karen and the rest of the family watched flames lick their roof.

The picture was so clear that Bill Moreau was able to see Lucy's water bowl.

"It's just unbelievable to watch your house burn down on the news," he said.

'People have been so nice'

On Friday, Karen Moreau said sadness just comes over her and she has to take a minute.

She broke down in front of a hotel clerk who walked around the counter to hug her.

"People have been so nice," she said. "I just felt better after she did that."

The baby is bringing more joy than they thought possible. "Emmet is getting held a lot," Bill Moreau said.

While the Moreaus try to push on, officials say that the Black Forest Fire has scorched close to 16,000 acres and killed at least two people. Authorities said Friday that they are surveying about 7,000 homes in the area.

At an 11 a.m. briefing Friday, El Paso County Sheriff Terry Maketa said workers plan to have a couple of updates about homes throughout the day. Marked units are moving through neighborhoods, and if they see a door ajar or flames approaching a home, they call for firefighters, the sheriff said.

Some 750 firefighters have helped contain the blaze by 5%. With the help of helicopters and air tankers, they established a loose perimeter.

There were other fires in the state as well, including in Grand and Huerfano counties. Black Forest was the biggest of the blazes.