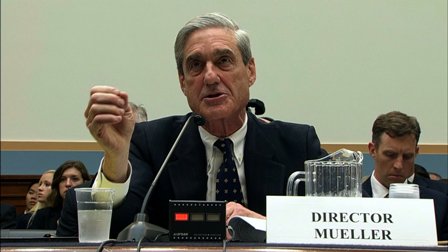 "The legality has been ensured" by the Department of Justice, and special federal courts set up to handle surveillance issues "ruled and monitored these programs and again, ensured the legality," he told the House Judiciary Committee.

Mueller's remark about the programs that collect telephone and computer information were the latest government defense of them as vital for national security, despite concerns that they go beyond the scope of the Patriot Act passed after the September 11, 2001, terrorist attacks.

Rep. John Conyers of Michigan complained Thursday about what he depicted as overreach by law enforcement and intelligence agencies in the name of national security.

"We are a nation of laws, not men," Conyers, the ranking Democrat on the panel, said in his opening statement at the hearing.

He told Mueller that in his opinion, the FBI's role in the surveillance programs disclosed by the leaks "are inconsistent with the requirements of the Patriot Act" and violate the privacy rights of citizens.

"It's my fear that we are on the verge of becoming a surveillance state, collecting billions of electronic records on law-abiding Americans every single day," Conyers said.

In particular, he said, Section 215 of the Patriot Act "is being used to engage in a nationwide dragnet of telecommunications records."

Conyers also complained about the secrecy of the activities, saying the government relied too much on covering up what it was doing through classified programs.

He said he was co-sponsoring legislation that would address "the overbreadth and impenetrability of the surveillance programs."

Mueller said that members of Congress were briefed about the covert programs and that legislators had the authority to change the law if desired.

"If a change were to be made ... so be it, and we would follow the letter of the law," he said. At the same time, he said, the classified leaks that revealed the programs hurt national security.