Officials: Obama to Tap Ex-Bush Official As Next FBI Chief 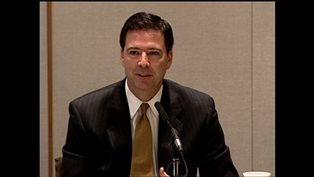 Comey is a former prosecutor who worked in New York and Virginia, where his caseload included terrorism, organized crime and fraud prosecutions, the latter including executives from WorldCom, Adelphia and Imclone, an official biography notes.

He served as a deputy attorney general in President George W. Bush's administration beginning in 2003.

Comey testified to a Senate committee in 2007 that he considered resigning his high-profile administration position over a disagreement about the National Security Agency's domestic surveillance program.

That happened in 2004, when he was acting attorney general while John Ashcroft was hospitalized following emergency gall bladder surgery. Government officials had told CNN that Comey had "vigorously opposed" aspects of the warrantless wiretapping program and refused to sign off on its continued use.

Comey's opposition prompted then-White House chief of staff Andrew Card and then-White House Counsel Alberto Gonzales to visit Ashcroft, the attorney general, in the hospital. Comey was in the room at the time, and he recalled later that "I thought I had just witnessed an effort to take advantage of a very sick man."

From there, Comey worked as a senior vice president and general counsel for the aerospace and defense company Lockheed Martin. More recently, he had been general counsel at the Connecticut-based money management firm Bridgewater Associates.

Currently, Comey is a board member of HSBC Holdings and a Hertog Fellow in national security law at Columbia University's law school, his profile on the school's website says.

Sen. Charles Grassley, the ranking member of the Senate Judiciary Committee, said he hadn't heard anything from the White House about Comey's nomination. That said, the Iowa Republican lauded Comey for having "a lot of experience on national security issues, ... and (he) has shown integrity in dealing with these matters."

"But if he's nominated, he would have to answer questions about his recent work in the hedge fund industry," Grassley said, referring to Comey's time with Bridgewater Associates. "The administration's efforts to criminally prosecute Wall Street for its part in the economic downturn have been abysmal, and (the FBI) would have to help build the case against some of his colleagues in this lucrative industry."

If nominated and approved by Congress, Comey will replace the man who will have led the FBI for the past 12 years -- officially starting the job days before the September 11, 2001, terror attacks and later seeing the agency through terrorism and other high-profile cases.

Mueller's term had been set to expire in September 2011 -- per the 10 years that FBI directors typically serve -- but, at Obama's request, Congress approved a two-year extension. He's now scheduled to step down in September.