By Michael Pearson and David Mattingly CNN
Published: 24 May 2013 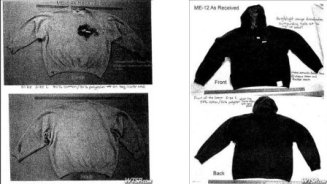 Items taken from Trayvon Martin's cell phone -- including a text-message discussion of drug use and pictures of a gun and marijuana plants -- are among new details released Thursday by attorneys for the neighborhood watch volunteer accused of killing him without provocation 14 months ago.

The evidence, George Zimmerman's attorneys say, paints a different picture of the 17-year-old than the one portrayed by his family and supporters. Lead defense attorney Mark O'Mara says he will try to use the evidence if prosecutors attempt to attack Zimmerman's character during his trial on second-degree murder charges, set to begin next month.

Also Thursday, O'Mara filed motions in court. One asks for sanctions against the state for withholding evidence and for saying it didn't have more evidence when asked. The second requests that his client's trial be delayed.

Much of the new evidence disclosed Thursday in filings by Zimmerman's attorneys comes from Martin's cell phone, including photos showing a semiautomatic pistol and ammunition and small marijuana plants growing in pots.

In other pictures, Martin is pictured making obscene gestures in an apparent self-portrait, as well pictures showing him with friends and in other settings.

The text messages include a conversation from November 2011 in which he appears to say his mother has kicked him out of the house after "da police caught me outta skool."

"So you just turning into a lil hoodlum," the person with whom he is texting says.

In other messages, text message exchanges appear to be discussing guns.

The text messaging logs are also peppered with references to marijuana use.

"I got weed nd I get money Friday," a message sent from his phone reads.

"I hid m weed," another text sent from Martin's phone reads. "its wrapped."

The attorney for Martin's family, Benjamin Crump, says the evidence is "irrelevant" and predicted it would never be used at Zimmerman's trial.

"Is the defense trying to prove Trayvon deserved to be killed by George Zimmerman because (of) the way he looked?" Crump said in a statement released Thursday.

"If so, this stereotypical and closed-minded thinking is the same mindset that caused George Zimmerman to get out of his car and pursue Trayvon, an unarmed kid who he didn't know. The pretrial release of these irrelevant red herrings is a desperate and pathetic attempt by the defense to pollute and sway the jury pool."

Instead, he said, jurors will focus on Zimmerman's arrest for battery on a police officer, a domestic violence injunction and other issues he said demonstrate a "propensity for violence."

Zimmerman's defense also released Thursday a handwritten note that was allegedly written by someone who was on the phone with Martin when the confrontation with Zimmerman took place.

The note, dated March 19, 2012, is not addressed to anyone in particular and it's not clear why the person wrote it.

It reads: "He started walking then noticed someone was following him. Then he decided to find a shortcut cause the man wouldn't follow him. Then he said the man didn't follow him again. Then he looked back and saw the man again. The man started getting closer. Then Trevon turned around and said why are you following me!!

"Then I heard him fall, then the phone hung up. I called back and (not legible) no response. In my mind I thought it was just a fight. Then I found out this tragic story."

Zimmerman recently waived his right to a pretrial hearing under Florida's "stand your ground" law, which allows people to use deadly force when threatened regardless of where they are.

His attorneys will claim self-defense at trial.

A representative of the special prosecutor handling the case did not immediately return an e-mail message seeking comment on the evidence.

Prosecutors renewed their motion for a gag order in the case Thursday because, they say, they're concerned about finding an impartial jury given the "inordinate amount of media coverage."

Two previous gag order requests by the prosecution have been denied.