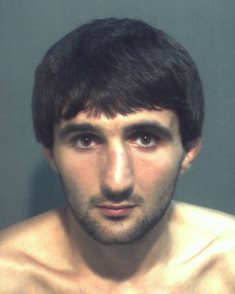 (CNN) -- A man fatally shot early Wednesday by an FBI agent in Orlando was being investigated for a possible connection to the Boston bombings, a U.S. law enforcement official with direct knowledge of the Boston Marathon case told CNN.

The man who was shot, Ibragim Todashev, 27, knew both of the Tsarnaev brothers, Tamerlan and Dzhokhar, the official said.

The agent shot in self-defense in the incident, which occurred at Todashev's house, the law enforcement source said.

While he was being questioned by an FBI agent, two Massachusetts State Police troopers and other law enforcement personnel, "a violent confrontation was initiated by the individual," FBI spokesman Jason Pack said.

Agents were led to Todashev, who had once lived in Boston, "through investigative leads," the official said.

Todashev was from the Chechnya region, as were the Tsarnaev brothers, who are suspects in the April 15 Boston bombings. He had been living in the United States as a legal resident since approximately 2008, the source said.

The source added that the FBI had been investigating Todashev for about a month; the bombings occurred on April 15.

Khasuen Taramov told the TV station that Todashev was living in Boston a couple of years ago when he became acquainted with Tsarnaev; after the deadly Boston Marathon bombings, the FBI began questioning and following Todashev and Taramov.

Todashev "wasn't like real close friends (with Tsarnaev), but he just happened to know him," Taramov said. "But he had no idea that they were up to something like that, like bombings and everything, you know what I mean?"

He told CNN affiliate WESH that Todashev and the elder brother, Tamerlan Tsarnaev, had spoken by telephone about a month before the bombings.

"It was a complete shock to him," Taramov said.

The two met in Boston, where Todashev had lived and where there is a small, closely knit community of Chechens, said Taramov.

Their telephone conversation before the bombings contained nothing but routine pleasantries, he said. "It was 'How are you doing, how's your family?' That's all."

Taramov said he himself was questioned by the FBI for three hours Tuesday night. Asked what he was asked, Taramov said, "Different kind of questions like what do you think about bombings, do you know these guys, blah blah blah, what is my views on certain stuff."

He said Todashev was not a radical. "He was just a Muslim. That was his mistake, I guess."

Taramov said his friend had told him he had a bad feeling about the direction the investigation was heading. "He felt like there's going to be a setup ... bad setup against him. Because he told me, 'They are making up such crazy stuff, I don't know ... why they doing it. OK, I'm answering the questions, but they are still making up some, like, connections, some crazy stuff. I don't know why they are doing it.' "

Before meeting with the FBI for a 7:30 p.m. interview Tuesday, Taramov said, his friend asked him to take his parents' telephone numbers. "He just told me, 'Take the numbers, in case something happens, if I get locked up, or whatever, call them.' You know what I mean?

"We were expecting to get him locked up, but not getting him killed. I can't believe it."

Todashev was unemployed and had been living off of insurance money after surgery for an accident. "He used to be a fighter, MMA fighter," Taramov said, in a reference to mixed martial arts.

Todashev had recently gotten his green card and had been planning to visit his parents in Chechnya, and then return to the United States, but canceled the plans, Taramov said.

Now, he added, he was planning to call his friend's parents.

An FBI post-shooting incident review team was expected to depart Washington and arrive within 24 hours in Orlando, said Special Agent Dave Couvertier, an FBI spokesman. Such reviews are standard when an agent is involved in a shooting.