Obama to New Grads: 'No Time for Excuses' 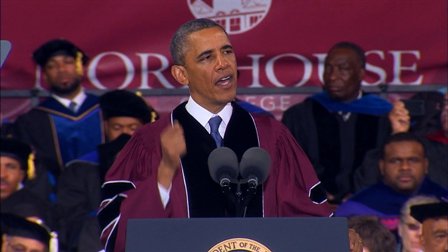 ATLANTA (CNN) -- Past, present and future came together on a thunderstorm-filled Sunday, as President Barack Obama received an honorary doctorate and gave the commencement speech at historically black, all-male Morehouse College, where the Rev. Martin Luther King and many other prominent African-Americans spent their formative years.

After opening with several one-liners, and more smiles than we've seen from him in the damage-control-filled recent weeks, Obama delivered a serious message to the class of 2013.

During a speech rife with both personal and historical references, the president invoked a past full of challenges, often resulting from racism, but noted that African-Americans need to break free from that past to succeed in a globally competitive economy.

"I understand that there's a common fraternity creed here at Morehouse: 'Excuses are tools of the incompetent, used to build bridges to nowhere and monuments of nothingness,'" Obama said.

"We've got no time for excuses -- not because the bitter legacies of slavery and segregation have vanished entirely; they have not. Not because racism and discrimination no longer exist; we know those are still out there. It's just that in today's hyperconnected, hypercompetitive world, with millions of young people from China and India and Brazil -- many of whom started with a whole lot less than all of you did -- all of them entering the global workforce alongside you, nobody is going to give you anything that you have not earned," he said.

"Nobody cares how tough your upbringing was. Nobody cares if you suffered some discrimination. And moreover, you have to remember that whatever you've gone through, it pales in comparison to the hardships previous generations endured -- and they overcame them. And if they overcame them, you can overcome them, too," he said.

Following Tadele -- whom Obama jokingly called "a skinny guy with a funny name" -- Obama reflected on how being an African-American has affected his personal journey.

"Whatever success I have achieved, whatever positions of leadership I've held, have depended less on Ivy League degrees or SAT scores or GPAs, and have instead been due to that sense of connection and empathy, the special obligation I felt, as a black man like you, to help those who need it most; people who didn't have the opportunities that I had -- because there, but for the grace of God, go I. I might have been in their shoes. I might have been in prison. I might have been unemployed. I might not have been able to support a family. And that motivates me," the president said.

The president's repeated mention of connection to the black community comes after blunt criticism from Morehouse alumnus Kevin Johnson, a pastor from Philadelphia, who criticized Obama in an April 14 editorial in the Philadelphia Tribune, calling him "a president for everyone, except black people."

Johnson gave a baccalaureate sermon on Saturday as part of Morehouse's graduation weekend.

The president's speech on Sunday was well-received, though the crowd had to brave some thunder and lightning and endure pouring rain.

Later, he noted that Morehouse men can set examples for other groups that have been subjected to discrimination: Hispanics, gays and lesbians, Muslims, and women.

Obama said his job, as president, is to advocate for policies that generate more opportunity for everyone, and he implored the Morehouse grads -- and all Americans -- to "advocate for an America where everyone has a fair shot in life."

Obama finished his speech with another message not just to the newly minted Morehouse grads, but to all Americans -- a message based on Martin Luther King's refusal to be afraid.

"That's what being an American is all about. Success may not come quickly or easily. But if you strive to do what's right; if you work harder and dream bigger; if you set an example in your own lives and do your part to help meet the challenges of our times, then I am confident that, together, we will continue the never-ending task of perfecting our union," he said.

And despite lots of big-picture talk about success and giving back, Obama made it clear that without appropriate focus on those closest to you, big-picture accomplishments mean little.