The Irs Scandal and Obamacare 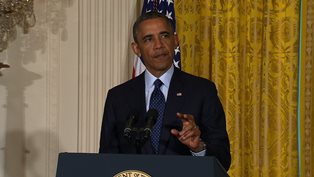 House Republicans are expected to vote Thursday to repeal President Obama's 2010 health care law. This will be the third time the House has voted to overturn the Affordable Care Act, better known as Obamacare, since the GOP took over the chamber in January of 2011. And House Republicans have voted over 30 times to repeal or defund parts of the law.

But this time, thanks to the raging scandal over the IRS targeting of tea party and other grassroots conservative groups, the GOP has some extra ammunition.

The vote, on a bill to repeal the law, will pass. And then it will die in the Democratic controlled Senate. Over the past week House Republican leaders have been touting the vote on the legislation, H.R.45, which would eliminate the law, leading to the end of the controversial individual mandate as well as some popular provisions such as allowing children to remain on their parents' health insurance until they're 26.

"Today the House is voting to repeal the president's health care law because it's increasing the cost of health insurance," said House Speaker John Boehner Tuesday.

"Obamacare repeal is there again because we do not believe that an individual mandate is the direction, Washington based health care is the direction we ought to go," House Majority Leader Eric Cantor, the number two Republican in the chamber, said Wednesday.

"Clearly this law is making it worse for Americans. From all backgrounds, from all walks of life, from every corner of this country. It imposes higher costs, it is limited access. It's very difficult to find a doctor who will take a new Medicare patient. It is threatening the very health innovation and medical technology that this country has led," added Rep. Cathy McMorris Rodgers, GOP conference chairwoman.

House Democrats call the vote a waste of time. House Democratic Leader Nancy Pelosi says there hasn't been a vote on a jobs bill so far this year, adding that "instead, we're wasting time once again on the Republican repeal of the Patient's Rights. This is something that is stunning, because not only is it a waste of time, it's a waste of money. $52 million, over $52 million calculated, the cost of taking up this bill over and over again, which they know is going nowhere."

"Welcome to Groundhog Day. This is the 37th time that the majority has attempted to repeal the Affordable Care Act," said DeLauro "Instead of working together to move forward, this majority persists in re-litigating the healthcare fight of 2010. They need to face it. Healthcare reform was passed by the House of Representatives, it was passed by the US Senate, it was signed by the President, it was upheld by the Supreme Court, it is the law of the land."

The most recent polling indicates Americans remains divided over the law. Thirty-five percent of those questioned in a Kaiser Family Foundation survey conducted last month said they had a favorable view of the law, with four in ten holding an unfavorable view and a quarter unsure. A Quinnipiac University national poll conducted a few weeks earlier had similar numbers.

Polling indicates an expected wide partisan divide. Nearly three-quarters of Democrats questioned in the Quinnipiac survey said the approved of the law. That figure dropped to 38% for independent voters and down to just 8% for Republican voters.

"Republicans don't know how to quit Obamacare. Obamacare is at the core of Republicans' criticism of the President Obama, and until public opinion shows that Americans are wildly happy with it, I don't see Republicans giving up on repealing it anytime soon," says Nathan Gonzales, deputy editor of the non-partisan Rothenberg Political Report.

And 2014 politics is also behind this vote. All 435 House members are up for re-election next year.

"As Speaker Boehner said, I think this vote is about getting Members on the record for this Congress - Members that are new to Congress and haven't had a chance to vote on the health care bill one way or another. I don't think this vote is just about Republicans proving their conservative credentials, it's also about Democrats having to take a position on the issue after only making statements on the campaign trail before they were elected," adds Gonzales.

So what does the IRS controversy have to do with repealing the health care law?

The agency is a key player in implementing the Affordable Care Act. Starting next year the IRS is expected to distribute subsidies, through the planned state exchanges, for health care coverage, and the agency would penalize individuals who don't get insurance and small businesses that don't provide coverage.

GOP Sen. Dean Heller of Nevada said he'd introduce a bill this week to freeze any future heath care funding directed towards the IRS until Congress is given more oversight.

"With the implementation of Obamacare at hand, and knowing it's the IRS - the Internal Revenue Service - who will be the enforcing mechanism for this new entitlement program of Obamacare, it is very important to ask - and now it is reasonable to ask - could there be potential political implications of access to healthcare, denial of healthcare. Will that happen based upon a person's political beliefs, or their religiously held beliefs?" asked Rep. Michele Bachmann, Thursday morning, at a tea party event on Capitol Hill concerning the IRS scandal.

"Those questions would have been considered out of bounds a week ago. Today these questions are considered more than reasonable, and more than fair for the American people," added Bachmann, a former GOP presidential candidate who's the head of the long dormant House Tea Party caucus.

The IRS scandal is taking an already combustible battle over health care and turning up the heat even higher.