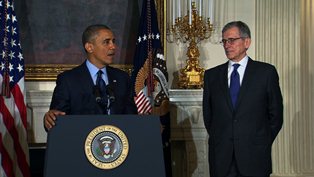 WASHINGTON (CNN) -- Calling him the "Bo Jackson of telecom" for his membership in both the cable television and wireless industries' halls of fame, President Obama announced plans Wednesday to nominate Tom Wheeler to head the Federal Communications Commission.

"For more than 30 years Tom's been at the forefront of some of the very dramatic changes that we've seen in the way we communicate and how we live our lives," Obama said.

Roughly half of Wheeler's 30 year career has been spent as a chief lobbyist for the telecommunications industry, first as president of the National Cable Television Association from 1979 to 1984 and then as CEO of the Cellular Telecommunications & Internet Association from 1992 to 2004. But his supporters point out that while Wheeler was in charge both of these industries were seen as newcomers lobbying for increased consumer access.

"The industries were different then," said Dale Hatfield, former chief of the FCC's Office of Plans and Policy and a supporter of Wheeler's nomination. "They were still emerging then and he's always been on the pro-competition side."

"I think he will probably be one of the most experienced FCC Chairmen that I can remember, because of the range and depth of his experience in the relevant industries," said Tom Lenard, president of the Tech Policy Institute. "I think the concerns that he's been a lobbyist for various industries are overblown at a minimum. I think he's going to understand what it is to have a government job and serve in the public interest but his experience is going to serve him well."

As an early supporter of then-Senator Obama's campaign for president, Wheeler and his wife moved to Iowa in 2007 to work in the run-up to the state's caucuses. He also raised hundreds of thousands of dollars for the president as a bundler in both 2008 and 2012. After the 2008 election, Wheeler served as a technology advisor on the president's transition team.

Kevin Werbach, who served alongside Wheeler on the president's transition and was a counsel for the FCC during the Clinton Administration, dismissed concerns that Wheeler's appointment may be a thank you for his fundraising efforts or a favor to corporate interests.

"The president isn't nominating a résumé, he's nominating a person and people who have worked with Tom Wheeler and have seen him in action know that it's unfair to say he's here just because he was a lobbyist or just because he was a fundraiser," said Werbach, who now works at the Center for Technology, Innovation and Competition at The University of Pennsylvania Law School.

In March, a vocal group of Democratic senators wrote a letter to the president calling for the promotion of Democratic Commissioner Jessica Rosenworcel as the FCC's first chairwoman. The effort was spearheaded by a senators who have expressed hesitance about Wheeler's close connection to many of the industry's he may be responsible for regulating.

"The loudest opposition is from groups who look at his resume and see that he ran industry trade organizations and expect he'll be too industry friendly," Werbach said. "But that's looking at a piece of paper. It's a challenge for him during the confirmation process to make clear that he's not going there to be a servant for the industries he used to work for."

The next FCC chair will have to deal with challenges surrounding an impending court decision on internet freedom, an exploding demand for wireless data and the ongoing transition to an all-internet protocol communications infrastructure. These changes create a desire for a "strong, principled leader at the FCC," Werbach said.

In addition to his experience in telecom, Wheeler has also authored two books on Abraham Lincoln's leadership during the Civil War, a fact several of his former colleagues cited as proof that he is capable of being an effective chairman.

Current FCC Chairman Julius Genachowski plans to step down in mid-May, at which point the president announced that Commissioner Mignon Clyburn will take over as acting chairwoman until Wheeler can be confirmed.