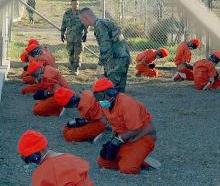 President Barack Obama said Tuesday that he continues to believe that the United States should close the detention facility at Guantanamo Bay, Cuba. "I think it's critical for us to understand Guantanamo is not necessary to keep America safe, it's expensive, it's inefficient, it hurts us in terns of international standing, it lessens cooperation with our allies in counterrorism efforts. ... It needs to be closed. ... Congress determined that they would not let us close it." Obama said he's asked his team to review the matter and re-engage with Congress "to try to make the case that this is not something that's in the best interest of the American people."

A report issued by The Constitution Project in April detailed torture and abuse of prisoners. More than 100 men are on hunger strike and some are close to death. Some are being force-fed.