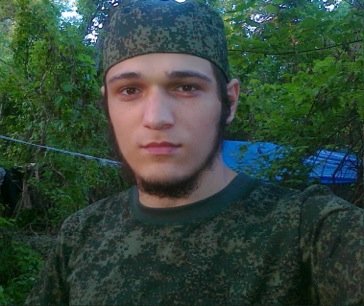 (CNN) -- The FBI has interviewed "Misha," an elusive figure whose name has surfaced in the Boston bombing probe, a U.S. government official told CNN Monday.

The man, whose real name is Mikhail Allakhverdov, denies ever encouraging a violent take on Islam, and says he was not Tamerlan's teacher, according to a New York Review of Books writer who says he interviewed "Misha."

"He began telling me he cooperated with the FBI" and had "handed over his computer" and cell phone, reporter Christian Caryl told CNN Monday.

Allakhverdov insisted he had "nothing to do with radicalization," Caryl said.

CNN has made repeated efforts to speak with Allakhverdov, but has so far been unable.

Tamerlan Tsarnaev, 26, died after a shootout with police; his younger brother, 19-year-old Dzhokhar, remains hospitalized with gunshot wounds. He has been charged with using and conspiring to use a weapon of mass destruction resulting in death, as well as one count of malicious destruction of property by means of an explosive device resulting in death.

The double-bombing near the finish line of the Boston Marathon killed three people and wounded more than 260 -- at least 14 of whom have needed amputations, according to medical officials.

Caryl said when he showed up at Misha's home, he took the family by surprise, but managed to spend some time with him.

"I wasn't his teacher. If I had been his teacher, I would have made sure he never did anything like this," Allakhverdov said, according to Caryl's report.

"A thirty-nine-year-old man of Armenian-Ukrainian descent, Allakhverdov is of medium height and has a thin, reddish-blond beard," Caryl wrote. "When I arrived he was wearing a green and white short-sleeve football jersey and pajama pants. Along with his parents, his American girlfriend was there, and we sat together in a tiny living room that abuts the family kitchen."

He added, "In many ways, Allakhverdov's parents seem typical former-Soviet émigrés who had embraced middle class life in the United States. His father is an Armenian Christian and his mother is an ethnic Ukrainian."

In the article, Allakhverdov's father is quoted as saying, "We love this country. We never expected anything like this to happen to us."

Ruslan Tsarni, Tamerlan's uncle, told CNN last week that a friend of his nephew "just took his brain. He just brainwashed him completely."

After The Associated Press said members of Tsanaev's family identified the friend as Misha, Tsarnaev's former brother-in-law told CNN that Tsarnaev had a friend by that name. Elmirza Khozhgov said the friend apparently "had influence on Tamerlan." But Khozhgov said he did not see Misha try to radicalize Tsarnaev.

Investigators are looking into whether Tsarnaev was influenced toward radicalization during a six-month visit to Dagestan in 2012 -- a region known to include radical jihadists who have battled the Russian government.

Authorities have not said whether the raid was linked to the Boston bombing.

But one of those killed was an associate of Abu Dujan, the slain leader of a militant Islamist organization that produced at least one video that Tamerlan apparently posted and later removed from a social media account, according to an analysis by CNN and the SITE Intelligence Group.

Russian authorities intercepted a phone call in early 2011 from one of the Tsarnaev brothers in the United States to their mother in Dagestan, an official with knowledge of the investigation told CNN over the weekend.

The wiretapped communication discussed jihad, but the conversation was vague, two U.S. officials said. It's unclear why the Russians were eavesdropping on the mother or for how long.

CNN has previously reported that the FBI conducted an investigation -- including an interview with Tamerlan Tsarnaev -- after Russia expressed concerns in 2011.

The Russians also raised questions about Tsarnaev's mother, Zubeidat Tsarnaev, according to several sources. Her name was subsequently added to a terrorism database along with her son's, an intelligence official said last week.

The FBI said at the time that it found nothing to justify further investigation and that Russia did not respond to U.S. requests for more information. The case was closed after several months.

One of the officials declined to say whether the information from the wiretapped phone call would have made a difference in uncovering plans for a future attack on the U.S.

However, CNN contributor Tom Fuentes said the FBI would have found that information helpful after Russian officials asked the agency to look at Tamerlan Tsarnaev for signs of a possible shift toward increasing Islamic extremism.

Suspect's vows to travel to U.S. if she can see her son

On Monday, Zubeidat Tsarnaev told CNN's Nick Paton Walsh that she plans to come to the United States if she can see her son, despite pending shoplifting charges against her in Massachusetts.

He had what appeared to be gunshot wounds to his head, neck, legs and hand when he was captured on April 19 after a nearly 24-hour manhunt, according to the criminal complaint accusing him in the marathon blasts.

He is able to speak and has been interacting with staff, a prison spokesman said.

He has, however, apparently been less talkative since authorities read him his Miranda rights three days after his capture.

But the information gained from two sessions of questioning has produced good leads, a U.S. law enforcement official said. He has been charged with using a weapon of mass destruction.