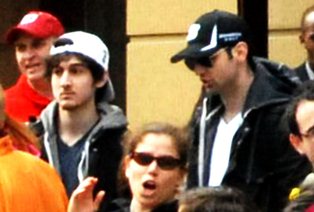 (CNN) -- The past week has been a devastating one for many families. Zubeidat Tsarnaev's is one of them.

But the mother of the two suspects in the Boston Marathon bombing remains resolute in her belief that her sons were not involved in the attack.

She told CNN's Nick Paton Walsh in Makhachkala, Dagestan, that she believes the tragedy that killed three people and injured dozens more was staged and that the bombing was fake.

Zubeidat Tsarnaev has seen a video supporting the idea that it was "something like a really big play," she said, with "paint instead of blood like it is made-up."

Does she really believe that?

Paton Walsh asked whether she had seen the news images of the actual bombings and the suffering they caused.

But her disbelief wavered when she spoke of the victims.

"There is something wrong," she said as she sought to articulate her confusion.

The elder son was killed after the two allegedly violently resisted and fled police.

His mother said at a news conference Thursday that authorities "already told us they will not let us see Dzhokhar."

She broke down in sobs as she tried to describe her torment as a "loving mother of two kids" faced with the events of the past week.

"This is really crazy. I can't even, I can't even describe it," she told Paton Walsh, looking drained. "I have no strength. I have nothing. I have no sleep. I am just like dead. Like a dead person."

Her husband, Anzor Tsarnaev, is expected to step off a flight in the United States in the coming days after a long journey from Dagestan.

She is not expected to fly with him. Zubeidat Tsarnaev is wanted on 2012 felony charges of shoplifting and property damage in Massachusetts, according to court officials.

The family lived there before she jumped bail, and they moved the same year to Dagestan, a semi-autonomous region of Russia, officials said.

She told Paton Walsh that she would like to travel to the United States. "I really want to see how it is going to end," she said. "I want to see my Tamerlan, if it's possible."

The felony charges weren't "a big deal" and are unimportant to her, she said.

"What I care about is only the death of my oldest son, who I think was killed, and my youngest one, who is really ... needs the support."

U.S. officials had shown her and her husband "pictures of dead body of Tamerlan," she said at the news conference. "I did not look. I could not believe it is my son."

Anzor Tsarnaev may be bringing along important information for the investigation into the April 15 marathon bombings.

He is to depart for the United States as soon as Friday, said human rights activist Kheda Saratova, who is serving as the parents' representative.

The father has said he will cooperate in the investigations into the alleged crimes of his sons.

'Because they were Muslim'

On Wednesday, FBI agents were in Makhachkala -- a city that Tamerlan Tsarnaev called home for several months in 2012 -- to talk with the suspects' parents.

Both parents have publicly said they believe their children are innocent and were framed: "just because they were Muslim," as Zubeidat Tsarnaev put it.

When asked whether she thinks her younger son will get a fair trial, she replied, "Only Allah will know."

The Tsarnaevs are originally from the troubled Russian republic of Chechnya but fled from the brutal wars there in the 1990s. The two brothers were born in Kyrgyzstan and then lived in Dagestan and moved at different times to the United States.

The family's adopted republic has become a focus for investigators, especially given that Tamerlan Tsarnaev went there during a six-month trip to Russia last year.

On two occasions before that -- in March and late September 2011 -- Russian authorities asked U.S authorities to investigate Tamerlan Tsarnaev.

Zubeidat Tsarnaev said the FBI had visited her family "several times" in 2011 with questions about Tamerlan's "Islamic interests."

"They said that they ... just think that Tamerlan is a kind of ... little on radical side of Islam and they just don't want ... they are keeping their eye on, you know, the boys, like young boys like Tamerlan so any bombing any like explosion won't happen in America. On the streets, like on the streets."

The FBI investigators told her there was nothing wrong with that, they just wanted everyone to be safe, she said.

The Tsarnaevs and Misha

A friend named Misha, whom Tamerlan met in the United States, steered the older suspect toward a more devout practice of Islam, Tamerlan's relatives have said.

"Tamerlan was close friends with him, so they think that Misha made him ... become more deeply religious," Zubeidat said.

She was impressed with the Armenian convert to Islam, who seemed "very intelligent, nothing wrong." He suggested that she cover her hair with a scarf, which she did.

"When Misha visited us ... he just opened our eyes, you know ... really wide about Islam. He was really, he's devoted, and he's very good, very nice man," Zubeidat Tsarnaev said.

"This person just took his brain," he said. "He just brainwashed him completely."

Elmirza Khozhgov, a former brother-in-law of the brothers, said the elder Tsarnaev brother introduced him to a man named Misha, but "I didn't witness him making him radical."

Zubeidat declined to be drawn on which mosques her son frequented, saying he went to any mosque he could go to. Media reports have focused on the Kotrova mosque in Makhachkala.

And she vehemently denied reports that Tamerlan had sent her text messages talking about the radical nature of his faith and that he was ready to die for Islam.

But, she said, he was always in her thoughts.

"I remember him always, always from the first day that he was born, there was no day that I don't remember him. ... He was the most caring son," she said.