Video: Welcome to the Masters - 10 Things to Know About Augusta

Mention the words Augusta, the Masters and clubs and you'd be forgiven for heading straight to the golf course.

And if you're feeling good and looking for all things sugar and spice then here are a few facts which might help your Masters 2013 experience. 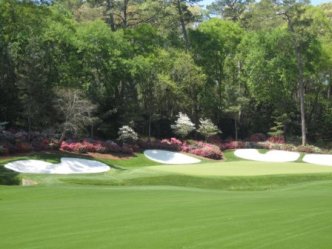 The man himself, "Godfather of Soul" James Brown, still looms large in Augusta with his statue standing proud in the middle of Broad Street.

Just a block away is the Imperial Theater where Brown would rehearse and fine tune his music before going abroad on world tours.

Born in South Carolina, Brown is still revered with fans from all over the world traveling to honor the singer who died at the age of 73 in December 2006.

Take a walk down a section of what used to be known as Ninth Street and you'll hit James Brown Boulevard -- a stretch of road where he used to shine shoes and earn a few dollars from passers -by with a song and dance.

And with the world's attention on Augusta, here's an all singing and all dancing guide to the biggest show in town -- the Masters.

Its critics might accuse Augusta of being stuck in the past, but the course has been one of the most technically progressive in the golfing world.

This year, organizers have placed four sensors on each green which monitor the temperature, soil moisture and salinity -- all controlled by iPad.

It's the latest in a long line of innovations from the tournament which was the first to introduce 72-hole golf over four days.

Being first is nothing new to Augusta though.

While Augusta might have embraced technology, it's not so keen on spectators, or "patrons" as they are known, using all the latest gadgets.

The course specifically bans cell phones, beepers or any kind of electronic communication system with cameras only permitted on practice days. If you do take a cheeky snap you end up losing your ticket and politely being asked to leave.

Augusta's course is renowned as one of the most beautiful and picturesque on the planet -- but it wasn't always that way.

During the Second World War, Augusta was forced to close and was used to house over 200 cattle and 1,400 Turkeys.

So from 1943 until late 1944, the course resembled something of a farm and it wasn't until 1946 that August reopened, thanks in part to the help of 42 German prisoners of war from Camp Gordon.

With each hole being named after a plant or shrub, its no surprise that Augusta takes the surrounding nature so seriously.

Last year's cold snap meant that patrons missed out on seeing the beautiful Azaleas which have adorned the course for so many years.

There's better news this year. Along with the Azaleas the dogwood, peach and cherry trees are blooming. The great old oak tree, which was planted in the 1850s, continues to charm, while the 61 large Magnolia trees which line the path from the entrance to the clubhouse were planted at around the same time.

The Champions Dinner has been going since 1952 when Ben Hogan first came up with the idea -- but while tradition has remained the food revolution has shown no signs of stopping.

On the Tuesday evening preceding the tournament, all the past Masters winners dine together with the reigning champion selecting the menu.

In 1998, Tiger Woods and friends feasted on cheeseburgers, chicken sandwiches, French fries and milkshakes. Others such as Mike Weir went for Elk and wild boar in 2004, while Scot Sandy Lyle went for Haggis, mashed potatoes and turnips in 1989.

It's not just the players that get to eat like kings, the patrons are well fed too and the prices are phenomenally low.

The world famous Pimiento Cheese sandwiches will set you back just $1.50 while the Egg salad, which has won rave reviews, is also available at the same price. You can pick up a beer for $3 while an imported lager will set you back $4.

Don't mention Augusta to an Australian -- it has proved something of a graveyard for the nation's golfers -- and the country is still getting over the pain and torment of Greg Norman's capitulation, which came after squandering a six-shot lead to Nick Faldo in 1996.

"The Shark" had already lost out in 1987 after losing to Larry Mize in a playoff. But Norman is not the only Australian to suffer at Augusta.

Back in 1950, Jim Ferrier, who hailed from Sydney, had his three-shot lead wiped out in the final round as he slumped to second and ended his career without a Masters victory.

Craig Parry, Stuart Appleby and Jack Newton all missed out on the final day, while Adam Scott and Jason Day were forced to settle for second in 2011.

Australia's golfers aren't the only ones to have been left Augusta spooked in Augusta.

The town has a whole host of ghost stories, while the famous "Haunted Pillar" still stands proudly on Broad Street.

The pillar, which used to support the market back in the 1830s, has been at the center of folklore since the story of how a traveling preacher cursed the town.

The preacher was unhappy with the abuse he received and is supposed to have said: "A great storm will tear this market asunder and only one pillar will be left standing!"

On February 8 1878, a tornado hit the city, killing several people, destroying the market and leaving just the pillar intact. It remains a tourist attraction, but only the brave actually touch it.

"It's a Man's Man's World" Brown once sang, but for how much longer?

For the first time ever, you might see two women wearing the iconic Green Jackets at Augusta after the club opened its exclusive membership to women last August.

For the first time in its history, women were invited to join with former U.S. Secretary of State Condoleezza Rice and South Carolina businesswoman Darla Moore both now members.

Rice played a practice round with three-times Masters champion Phil Mickelson last Sunday before heading to the clubhouse which had been closed to women since it opened in 1932.