Police have identified a suspect in a string of potential hate crimes in New York in which 12 mezuzahs were set ablaze as they hung on door frames outside Jews' homes. 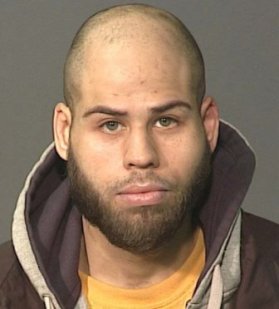 According to the NYPD, the suspect is wanted for setting fire to 11 mezuzahs inside an apartment complex in the Williamsburg section of Brooklyn on Monday, which was also Holocaust Remembrance Day. An additional one was discovered burned inside the apartment building next door a day later.

Police are searching for a Hispanic male in his 30s last seen wearing a purple do-rag and a black jacket with a New York Yankees emblem, as well as other writings, on the back.

"This was a brazen act of religious desecration, and it is something that is shocking to everyone in this community," City Councilman Stephen Levin told CNN affiliate WABC.

A mezuzah is usually found attached to a door frame outside some Jews' homes. It contains specific Hebrew verses from the Torah, printed on parchment, rolled up and put inside the case.