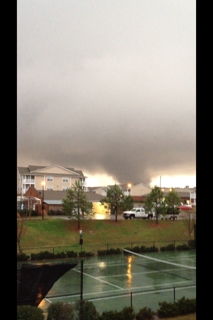 (CNN) -- Wildfires, tornadoes, snow, all on the same day. Sure, it sounds weird. But it's not, CNN meteorologist Judson Jones said Tuesday.

"Blinding snow and 40 degrees below average does not sound like spring in Denver. On the flip side, the 20 degrees above average forecast for New York City feels more like early summer," he said. "But the unexpected is what we expect in spring."

A day after bizarre weather on Monday in which emergency workers northeast of Denver responded to a wildfire, a possible tornado and a blizzard warning -- all within a 50-mile radius, a storm pouring over the Rockies gave Denver students a rare snow day on Tuesday.

It also caused the cancellation of at least 535 flights at Denver International Airport.

In South Dakota, which was on the lookout for up to 11 inches of snow on Tuesday, nearly four-tenths of an inch of ice had been recorded near Sioux Falls, with more on the way, the National Weather Service reported.

"It was 65 all last week!" CNN iReporter Nathan Zacher said. "Normally around 55 degrees this time of year."

The ice was downing trees and making travel tough, he said.

And while the Southeast and parts of the Northeast basked in sunny warmth, residents of the Central Plains braced for the possibility of severe storms, including tornadoes.

Central Oklahoma and parts of north central Texas were under moderate threat of severe thunderstorms, including the possibility of tornadoes, through Tuesday night, Jones said.

About 2.6 million people live in the path of those storms, which includes Oklahoma City and Tulsa in Oklahoma and Wichita Falls in Texas, Jones said.

In Denver on Tuesday, schools were closed, despite grumblings from parents online that there would be too little snow to keep kids home.

In a posting on its website, the district said Monday night that it made the call because it could be too hazardous to put kids on buses in what was expected to be icy, low-visibility conditions Tuesday morning.

At Denver International Airport, the staff said on Twitter that crews were continuing to clear snow and ice from runways and that about half the canceled flights were commuter flights to smaller Rocky Mountain towns.

The storm follows a busy day in Colorado, where the storm knocked out power to about half the small town of Akron, Colorado, destroyed a mobile home and damaged two other structures, at least one of which was a home, the state Division of Homeland Security and Emergency Management said.

No serious injuries were reported.

While it was not immediately clear if the winds in that storm were from a tornado, a tornado did briefly touch down near Bonny Lake in eastern Colorado on Monday, the National Weather Service reported.

Colorado crews also worked a 2,600-acre wildfire in Sterling County. Colorado has long been in a drought, and it wouldn't take much to spark a fire there, Jones said.

Inclement weather is not limited to the snow and ice. The National Weather Service said to expect "a plethora of interesting weather conditions."

Flood watches and warnings are in effect for most of Wisconsin on Tuesday, to be followed by freezing rain later in the week.

"Severe thunderstorms and even isolated tornadoes are possible across the central and southern Plains to the mid and lower Mississippi Valley," the weather service said.

By Wednesday, a squall line stretching from Memphis down through Louisiana should roll eastward through the Deep South, pushing through heavy thunderstorms, hail, damaging winds and possibly short-lived tornadoes, forecasters said.

It will be unseasonably warm in the Ohio Valley, Mid-Atlantic and Southeast, the weather service predicts.

It's not all bad

Most of the country will see rain for the better part of the week. That's good news for the Plains and Mountain States, which have seen extreme to exceptional drought for months.

The snow in the Mountain States will extend the fun for winter sport fans, according coloradoski.com.

As ski season winds down, with about half of resorts already closed, some popular slopes are expecting 1 to 5 inches of fresh powder through Wednesday.

The same goes for resorts in Utah.