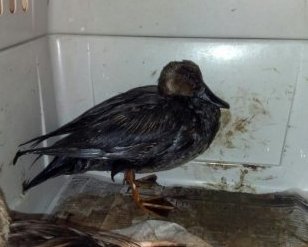 (CNN) -- Exxon Mobile will pay all of the costs related to last week's oil spill in an Arkansas neighborhood, a company spokesman said Wednesday.

Between 3,500 and 5,000 barrels of heavy crude leaked from a ruptured pipeline -- not 12,000 barrels, as previously reported, according to Exxon Mobile spokesman Alan Jeffers.

The company has no timeline yet for when the cleanup around the two dozen homes in a Mayflower, Arkansas, subdivision would be completed, Jeffers said.

Excavation of the contaminated soil is under way, weather permitting, he said. He did not have an estimate of the costs of the effort.

Arkansas Attorney General Dustin McDaniel has opened an investigation into what caused a 2- or 3-inch gash in the underground Pegasus pipeline, which began spewing crude Friday.

McDaniel said Tuesday he asked Exxon Mobil, the owner of the 60-year-old pipeline, to preserve all documents and information related to the spill and cleanup efforts.

"This incident has damaged private property and Arkansas's natural resources. Homeowners have been forced from their homes as a result of this spill," McDaniel said in a statement Tuesday. "Requesting that Exxon secure these documents and data is the first step in determining what happened and preserving evidence for any future litigation."

Exxon Mobil met with displaced residents over the weekend to explain how they can make claims for losses. "If you have been harmed by this spill then we're going to look at how to make that right," Exxon Mobil Pipeline Co. President Gary Pruessing told them