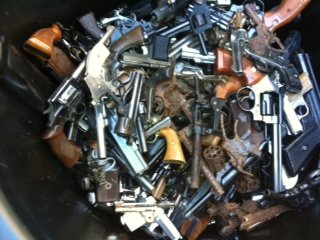 Connecticut will likely become the third state to pass a major overhaul of its gun laws when its General Assembly votes Wednesday on a measure crafted in the wake of the December massacre at an elementary school there.

Lawmakers announced the legislation Monday, which was drawn up by a bipartisan legislative task force.

According to a draft of the bill, the measure would add more than 100 types of guns to the state's list of banned assault weapons; limit the capacity of ammunition magazines to 10 rounds; ban armor-piercing bullets; require background checks for all weapon sales, including at gun shows; establish safety standards for school buildings; allow mental health training for teachers; and expand mental health research in the state.

But Scott Wilson, president of the Connecticut Citizens Defense League, said nothing in the new legislation would stop someone like Adam Lanza, the 20-year-old gunman who killed 26 children and adults December 14 in Newtown, Connecticut.

"In his case, he stole the guns and went on a murderous rampage. Limiting magazine capacity or mandating registration will only affect law-abiding persons, not criminals bent on murder," Wilson added.

A Republican member of the task force, House Minority Leader Larry Cafero, reassured gun owners they wouldn't lose their guns or ammunition magazines, "so long as they follow our rules and register," he said.

"Are there tighter restrictions on their use, etc.? Absolutely. We also were able to see as part of this legislation the repeal of early release for violent criminals."

The bill would expand the definition of an assault weapon by reducing to just one the number of specified "physical characteristics" that need to be present. Current law requires two.

The legislation would immediately ban any further sale, purchase or importation of magazines that can hold more than 10 rounds, but would allow current owners of larger-capacity magazines to keep them.

However, those magazines would have to be registered with the state by January 1, and even legally registered magazines could not be loaded with more than 10 rounds outside of the owner's home or a gun range, no matter what permits the gun owner may hold.

"It is ludicrous to expect people that have firearms capable of holding 15 rounds to only load 10 rounds inside of them," Wilson objected. "Do criminals really care about these laws?"

Families of the children slain in Newtown were disappointed the larger-capacity magazines were grandfathered in. They asked Monday for an across-the-board ban.

"On behalf of the loved ones who were violently taken from us, please reconsider your approach to large-capacity magazines as part of the comprehensive package of gun legislation," the families wrote in a letter to lawmakers.

"They've asked for an up or down vote on that provision, and, whether it's in the larger bill or as an amendment, the families, and every resident of our state, deserve a vote," he said in a statement Monday.

"I have been clear for weeks that a ban on the possession and sale of high-capacity magazines is an important part of our effort to prevent gun violence," the governor added. "Simply banning their sale moving forward would not be an effective solution."

In addition, the bill would create the nation's first statewide registry for people convicted of crimes involving the use or threat of dangerous weapons. The registry would not be public, but available to law enforcement only. Furthermore, it would require eligibility certificates for the purchase of any rifle, shotgun or ammunition, and would significantly increase penalties for illegal possession and firearms trafficking.

Other parts of the bill establish safety standards for school building projects and require each school in the state to develop a safety and security plan. It also requires safe school climate committees to investigate instances of bullying and other threatening behavior. Other provisions address security at colleges and universities.

Williams, the Senate president, told CNN he expected strong support for the bill from both sides of the aisle because of the bipartisan task force that put it together.

"We have broken the gridlock on the most controversial issue," he said in announcing the agreement.

"Democrats and Republicans were able to come to an agreement on a strong, comprehensive bill," he added. "That is a message that should resound in 49 other states, and in Washington, D.C.. and the message is we can get it done here and they should get it done in their respective states and nationally in Congress."

Connecticut's task force was made up of Williams and fellow Democrats House Speaker Brendan Sharkey, Senate Majority Leader Martin Looney and House Majority Leader Joe Aresimowicz; along with Senate Republican Leader John McKinney and Cafero, the House Republican leader. It based the draft legislation on proposals created by 16-member bicameral working groups on the topics of gun violence, school security and mental health.

"It's important for us to act quickly, but it's more important for us to act intelligently," Sharkey said. "It's also critical that we send the message to Washington and to the rest of this country that this is the way to get this job done. To do it in an effective, meaningful, thoughtful way and to do it in a meaningful, bipartisan basis, because our children deserve no less.