(CNN) -- Just two months have gone by since Hillary Clinton became a private citizen and stepped out of the spotlight for the first time in decades, but already the political world is watching every move she makes in preparation for the 2016 election. 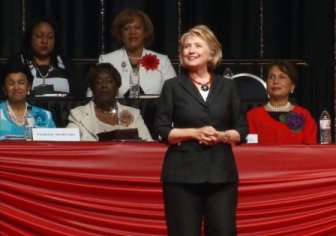 The GOP prepared reams of research documents to use against her back in 2008, but a lot of their ammunition went unused. Republican operatives are openly worrying about a Clinton coronation in 2016, so they plan to make use of it early.

To that end, groups such as the America Rising super PAC - led by Mitt Romney's former campaign manager Matt Rhoades - are gearing up. Defining Clinton on their terms is the first order of business.

One of the organizers pointed out to CNN that this group marks the earliest sustained effort in preparing for a presidential campaign and that they plan to move in earnest in a couple of months to begin defining the potential 2016 Democratic hopefuls. Their aim is to engage Clinton well before she is able to put a full campaign staff in place.

And that may make Team Clinton cagier than ever.

Despite the obsession within the Washington political class about whether she plans to run, her longtime spokesman, Philippe Reines, naturally cautioned against the speculation in an interview with CNN.

"I think people aren't just getting ahead of themselves, they're getting ahead of her," he said. "Sixty days has been the blink of an eye. We're talking about an election that's 1,300 days away, and it's to the point where everyone is seeing everything as a burning bush."

So when will her decision come?

Nevertheless, she's certainly keeping her options open. With two events focused on women this week alone, followed by her first paid speech later this month, for the National Multi Housing Council in Dallas, and an economic address to the Economic Club in Grand Rapids, Michigan, she's keeping on top of a range of issues. What's more, she has a book due out next year that will focus on her tenure as secretary of state.

Reines says that in the book, she'll prescribe what America needs to do "to stay strong and secure."

In other words, she's putting a platform together that will be ready for a launch if she chooses to run.