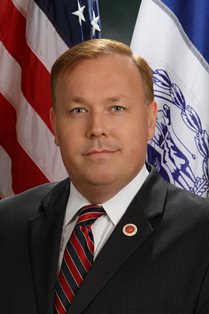 The U.S. attorney's office in Manhattan alleges that Smith, a Democrat, bribed Halloran, a Republican, to help guarantee Smith a spot on the Republican ballot in the November election.

Four other people were charged in the case, including Bronx GOP Chairman Jay Savino and Queens Republican Vice Chairman Vincent Tabone, who prosecutors say agreed to support Smith's bid in exchange for bribes.

Smith, Halloran, Savino, Tabone and two other people have been charged with conspiracy to bribe officials and other public corruption charges, the U.S. attorney's office announced Tuesday.

According to court documents, Smith met with an undercover FBI agent in November and, believing the agent to be a wealthy real estate developer, asked the agent to contact county GOP leaders and persuade them to support his bid for the GOP mayoral candidacy.

Later that day, Halloran, a former NYPD officer, met the agent at a restaurant in Queens, New York, where prosecutors say he agreed to act as a liaison for Smith, facilitating bribes, according to the documents.