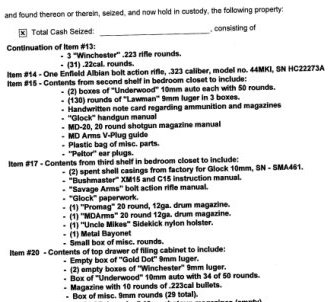 But on December 14, 2012, he went out -- armed with 10 30-round magazines for his semiautomatic Bushmaster .223 caliber model XM15 rifle and bullets for his two handguns and a shotgun.

Lanza didn't make it home alive. Nor did the 26 people -- 20 of them schoolchildren ages 6 and 7 -- he shot dead in less than five minutes, firing one bullet roughly every two seconds he was at Sandy Hook Elementary School.

These were among the details spelled out Thursday in five search warrants and other material tied to the grisly shooting at the Newtown, Connecticut, school, as well as in a statement from a local top prosecutor. Together, the newly released documents help paint a clearer picture of what happened.

What they don't explain is why Lanza did it.

The quest for answers, including the one about motive, continues. State's Attorney Stephen J. Sedensky III of the judicial district of Danbury, which includes Newtown, stressed in his statement Thursday: "This is an active, ongoing investigation. No conclusions have been reached, and no final determinations have been made."

At the same time, he acknowledged that the public -- including those intent on preventing other such massacres -- has an understandable, sincere desire to have information now.

That's the mindset of Tim Makris, co-founder of Sandy Hook Promise, which supports "common sense solutions that make ... our country safer." Even with its limited scope, he called Thursday's document release a step forward.

"The information revealed today underscores the need to turn this tragedy into transformation," Makris said.

Fresh insights into Lanza, his home

Although the new documents don't provide a motive, they offer fresh glimpses into the life of 20-year-old Adam Lanza, in part by revealing what was inside the Newtown home he shared with his mother, Nancy.

One person, whose name was redacted in a search warrant, described Adam Lanza as a shut-in who rarely left home and played military-style video games.

That house included a gun locker that investigators found open and without signs of a break-in, Sedensky said. All the guns tied to Adam Lanza appeared to have been purchased by his mother, he added.

Police also found more than 1,600 rounds of unspent ammunition inside the home, according to the documents. Gov. Dannel Malloy pointed out Thursday the mass killer left lower-capacity magazines behind, a fact that, he said, speaks to the need to significantly restrict the number of bullets that can be in each magazine. He also said assault weapons should be banned.

The Newtown house also had three Samurai swords and several books -- one titled "NRA Guide to the Basics of Pistol Shooting," another about Asperger's syndrome and a third on autism -- the newly released documents show. Connecticut's chief medical examiner has said he had been told that Lanza had Asperger's syndrome. Research has not shown a link between violence and that condition, a high-functioning form of autism marked by social awkwardness.

Investigators also found a 2008 New York Times article about a shooting at Northern Illinois University that left six dead, including the gunman.

They also took three photographs "of what appears to be a deceased human covered with plastic and what appears to be blood," a receipt for a shooting range in Oklahoma and National Rifle Association certificates for Nancy and Adam Lanza. The NRA, a gun rights advocacy group, has issued a statement saying neither Lanza nor his mother were members.

The carnage began in that house.

Before embarking on his rampage at Sandy Hook, Adam Lanza killed his 52-year-old mother by shooting her in the forehead as she lay in bed, a search warrant states.

"There was no indication of a struggle" between mother and son, Sedensky said.

From there, he drove to the elementary school -- leaving a 12-gauge shotgun in the car, police would discover -- and shot through the front entrance.

The information detailed Thursday dispelled some earlier reports on what happened, Sedensky noted. Lanza wasn't wearing a bulletproof vest, for one. And besides the hallway, he fatally shot students and teachers in two classrooms, not three.

When police found Lanza's body -- killed by a single, self-inflicted shot from a Glock 10 mm handgun -- they also discovered that the Bushmaster rifle was loaded with 14 bullets in its 30-round capacity magazine, plus one round in a chamber.

This was one of 10 of this firearm's 30-round capacity magazines at the scene, Sedensky explained. More ammunition for the Glock and a Sig Sauer P226 9 mm handgun was also found. Three such magazines still contained 30 rounds. There were six more magazines nearby -- three of them were empty, while the others had 10, 11 or 13 live rounds in them.

"One-hundred-and-fifty-four spent .223 casings were recovered from the scene," the state's attorney wrote, indicating that Lanza had fired at least that many bullets from what Connecticut authorities had described as an "assault-type rifle."

A lot of bullets fired in not a lot of time. Sedensky said, "It is currently estimated that the time from when the shooter shot his way into the school until he took his own life was less than five minutes."

The full investigation into the Sandy Hook shooting, Sedensky said, likely will be completed this summer.

After that happens, the state's attorney said he will write a report evaluating the crimes committed and whether or not anyone will be prosecuted as a result.

Until then, the debate over gun control stoked by the Sandy Hook massacre continues in earnest.

Recent polling shows public support for gun restrictions has declined since the shooting. Shortly after it, 52% of Americans favored major restrictions on guns, according to a CNN/ORC International poll. That number has dwindled to 43%, a version of the same poll conducted between March 15 and 17 found.

No legislation on the matter has passed yet in Washington, though gun control advocates are pushing.

Mayors Against Illegal Guns on Thursday released its first television ad featuring relatives of Newtown victims urging politicians to pass tougher gun laws. New York Mayor Michael Bloomberg, the group's co-founder, said in a statement: "We cannot afford to wait for another tragedy. It's long past time for elected officials to listen to their constituents and pass reforms like comprehensive background checks that we know will save lives."

President Barack Obama voiced a similar sentiment in remarks Thursday as part of a "national day of action" to galvanize supporters pushing for tougher gun laws.

"This is our best chance in more than a decade to take common sense steps that will save lives," he said at a White House event. "If there is a step we can take that will save just one child, just one parent, just another town from experiencing the same grief that some of the moms and dads who are here have endured, then we should be doing it. We have an obligation to try."

CNN's Ross Levitt and Samira Jafari contributed to this report.