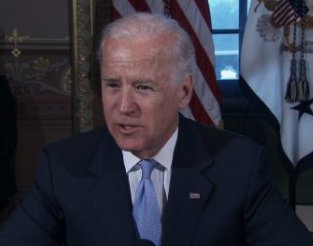 Vice President Joe Biden on Wednesday voiced support for background check legislation approved by the Senate Judiciary Committee earlier this week, drawing a connection between domestic abuse and gun violence when he unveiled a new federal grant that could help combat both issues.

"They both require urgent action. That's why the president and I believe that every person who buys a gun, every person should have a criminal background check," Biden said, speaking to a group at the award event in Rockville, Maryland. He appeared on stage with "Law & Order: SVU" star Mariska Hargitay and Attorney General Eric Holder.

The Senate Judiciary Committee on Tuesday approved a bill that would expand background checks for all firearm sales. The bill now goes to the full Senate for a vote.

The vice president added that in the last three years, 40% of all shootings with four or more victims started with the murderer targeting a girlfriend, an ex-wife or a wife. The number of women shot to death by an intimate partner, he added, is 38% lower in states that require background checks for handguns.

"This is the most tragic of all crimes," Biden said, referring to domestic violence.

"We've learned a lot over the last 20 years and what we've learned most is if we look hard enough, we can identify behavioral patterns most likely to result in something like the taking of a life," he said.

The Justice Department will grant a total of $2.3 million to 12 sites across the country, as part of the new Domestic Violence Homicide Prevention Demonstration Initiative. The program is modeled after initiatives in Massachusetts and Maryland.

In his speech, Biden cited some of "tell-tale" signs that researchers have learned can lead to homicide. Among them, he said, include sexual assault, attempts to strangle the victim, and threats to shoot the victim.

"These are the guys, this is the category from which you're most likely to get those folks who will take out a gun the next time and blow their brains out, who will strangle to death the next time," he said.

The grants are also designed to teach emergency personnel how to respond more quickly to signs of abuse and ask specific questions about the nature of the suspected violence.