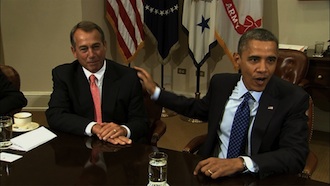 The president contacted freshman Sen. Jeff Flake of Arizona to talk about the issue of immigration reform while another call to Sen. Mark Kirk of Illinois focused on gun control and deficit reduction, "among other issues," according to a White House official.

The conversations with Flake and Kirk are an indication the president is expanding his outreach to Republicans beyond efforts to reach a grand bargain on deficit reduction and the automatic budget cuts that kicked in at the beginning of the month.

Administration attempts to improve relations with Republicans appear to have begun shortly after the president won re-election in November when top GOP leaders were invited to the White House for a special screening of the film, "Lincoln."

Among the invitees were House Speaker John Boehner and Senate Minority Leader Mitch McConnell. Both men declined the invitations to the screening that featured a visit with the filmmakers, including the movie's director, Steven Spielberg.

"We got very short notice and he had to swear in a new member," a Boehner spokesman said.

A McConnell aide also explained the invite came at the last minute, adding it "was during an afternoon when the Senate was in session."