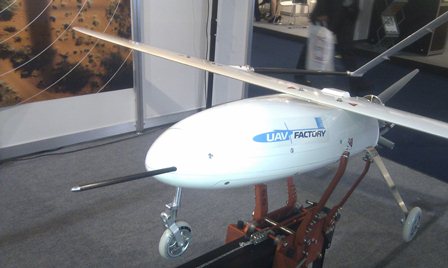 (CNN) -- Was there a drone flying over Brooklyn Monday afternoon?

The Federal Aviation Administration is investigating a report from a pilot of an Alitalia passenger jet who says he saw an unmanned aircraft while landing at John F. Kennedy Airport in New York.

"We saw a drone, a drone aircraft," the pilot can be heard telling controllers on radio calls captured by the website LiveATC.net.

"The FAA is investigating a report... he saw a small, unmanned or remote-controlled aircraft while on final approach to Runway 31 Right," according a statement sent to CNN by FAA spokeswoman Laura Brown. "The sighting was approximately four to five miles west of the airport at an altitude of approximately 1,500 feet," she said.

That description puts the aircraft somewhere over Brooklyn and on the other side of the airport from where the plane was coming in for a landing.

The Alitalia aircraft did not have to take any evasive action and landed safely at JFK.

Air traffic controllers warned other planes approaching the runway of the drone report, but at least two other pilots radioed they did not see it.

A spokesman for the New York Police Department was not aware of the incident and the Port Authority of New York and New Jersey, which operates the airport, referred CNN to the FAA.

Unmanned aerial systems, sometimes called drones, and other remote-controlled planes could pose a risk to larger passenger aircraft if they collided or were sucked into an engine.

For recreational hobbyists, flying remote-controlled planes is only allowed by the FAA up to 400 feet in the air, and within sight of the operator. If they are going to fly within three miles of an airport, they have to let air traffic controllers know.

Flying unmanned aerial vehicles is illegal for most business purposes; however, governments and public entities such as police departments can apply for permission to operate them.

The FAA has been working to setup new rules and to safely integrate the use of unmanned aircraft into the national air space, and last year opened an "unmanned aircraft systems integration" office.