Video: Chuck Hagel Vows to Be Honest and Direct with Defense Staff

His remarks--which got off to a rough start due to some audio issues--came just a couple of hours after he was sworn in. His first day on the job marks the next step after a long, bruising nomination battle that came to an end Tuesday.

"You'll always know that you have a secretary of defense that will deal straight with you. I'll be honest. I'll be direct. I'll expect the same from you," the Vietnam veteran told the audience. "I will never ask anybody to do more than I wouldn't do. That's the story of your lives. I wouldn't be worthy if that was not the case." 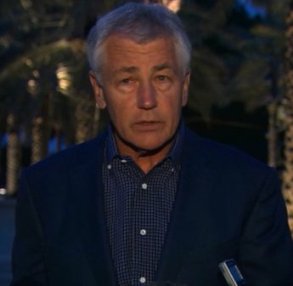 Hagel had endured months of scrutiny since word began spreading in December that he was considered a frontrunner for President Barack Obama's pick to replace retiring Defense Secretary Leon Panetta.

A former Republican senator, Hagel took heat from his own party in the Senate for some of his previous statements and positions, especially his opposition to the 2007 troop surge in Iraq and his opposition to unilateral sanctions against Iran.

After tense hearings with the Senate Armed Services Committee--which included a fiery grilling from his old friend, Sen. John McCain--Republicans filibustered Hagel's nomination. That debate ended Tuesday and the chamber confirmed Hagel later in the day.

Hagel further elaborated Wednesday on his views, saying he believes the United States' role in the world should be one of engagement.

"We can't dictate to the world, but we must engage in the world. We must lead with our allies," he said.

Hagel also made comments about the dominant news story of the day: the looming spending cuts set to kick in Friday. Before his retirement, Panetta was an outspoken critic of the automatic, across-the-board cuts, warning they could have a devastating impact on the military.

"We need to figure this out. You are doing that. You have been doing that. We need to deal with this reality," he said. "We have got ahead of us a lot of challenges."